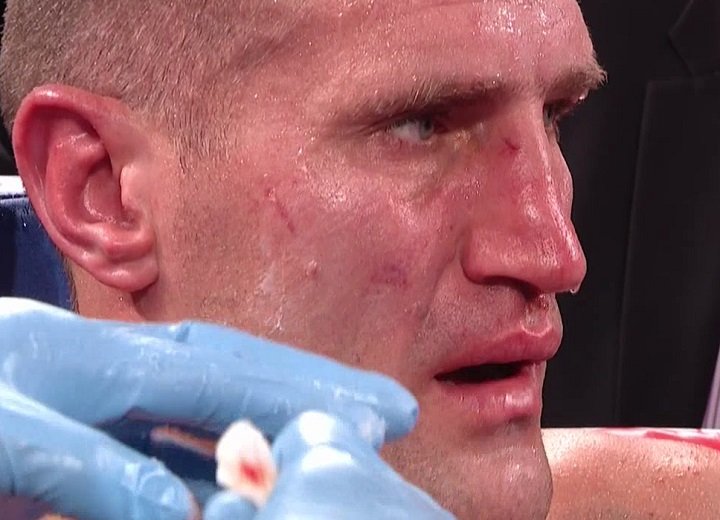 Jarrell “Big Baby” Miller (20-0-1, 18 KOs) beat injured former heavyweight title challenger Mariusz Wach (33-3, 17 KOs) by a 9th round TKO on Saturday night to win his 20th victory on the undercard of the Danny Jacobs vs. Luis Arias card at the Nassau Coliseum in Uniondale, New York.

The 6’8” Wach suffered a broken right hand, which led to the ringside doctor adding that the fight be stopped in round 9. The official time of the stoppage was at 1:02 of round 9.

Miller took some really hard right hands from Wach before he suffered a broken right hand. Those right hands were catching Miller clean each time. Miller did nothing to block those chopping shots. It’s really fortunate that Wach was the one that was throwing the punches rather than Deontay Wilder.

Wach wore down after the 3rd. He weighed in at 268 pounds last Friday, and that was far too much weight for him. Wach was carrying around a lot of fat on his midsection. He tried to hide his fat by pulling his boxing trunks up high to above his naval, and it looked very strange. This wasn’t the lean and young 251 pound Wach that lost to Wladimir Klitschko 5 years ago in 2012. This was a heavy Wach, with him coming in almost 20 pounds heavier with most of that weight being carried around his midsection.
Miller didn’t look nearly as good as he had in last 2 previous fights against Gerald Washington and Fred Kassi.

Miller came into the Wach fight 15 pounds lighter than his previous weight in weighing in at 283 lbs. Looking sloppy and weak, Miller spent much of the fight trying to crowd the tall Polish fighter on the inside. Miller got away with a lot of fouling of Wach in which he would grab him around the back of the head with his left hand, and then hold him while hitting him with uppercuts and straight rights. The referee let Miller get away with this move the entire fight. It was as if the referee was just there in body only, and doing zero to police the fouling.

Wach was at his best in rounds 1-3 in connecting with nice jabs and right hands. Wach had the better power of the two, and he landed some nice right hands occasionally. Miller took the shots well, but you have to wonder would be the results if he were getting hit by those shots from Anthony Joshua and Deontay Wilder.

Matchroom Sport promoter Eddie Hearn might be having second thoughts about the wisdom of him signing Miller to his promotional team. The way that Wach performed tonight, he would be knocked out by Wilder and Joshua. Even Dillian Whyte and Dereck Chisora would have a good chance of stopping Miller if they fought him. Miller is too slow and weak to compete against Chisora and Whyte. If Miller is going to be used by Hearn on occasional to fight some of his guys in his stable, then he’s going to need to think about matching him against one of his domestic level heavyweights like Dave Allen.