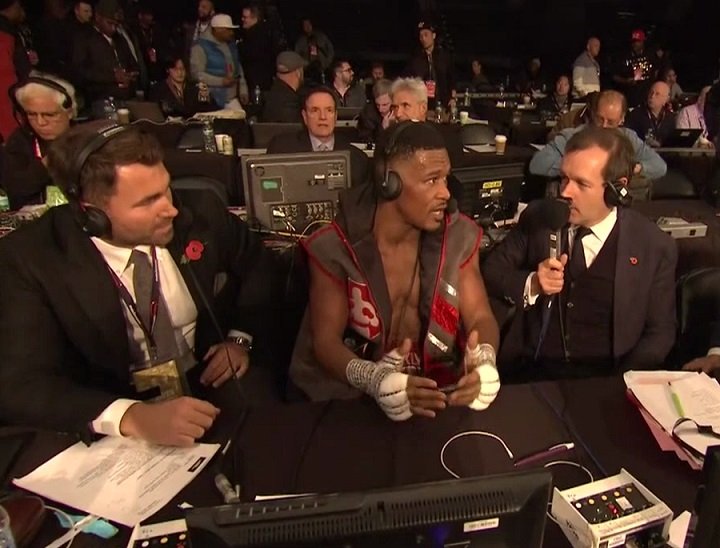 Former WBA middleweight champion Danny Jacobs (33-2, 29 KOs) took care of his hand-picked opponent Luis Arias (18-1, 9 KOs) in defeating him by a 12 round unanimous decision to get back to winning ways on Saturday night on HBO Boxing at the Nassau Veterans Memorial Coliseum in Uniondale, New York.

Jacobs didn’t look improved from his last fight against Gennady Golovkin. I’d say that Jacobs looked worse tonight than he did against Golovkin.

From round 1, it was immediately clear that Arias was just going to try and survive for 12 rounds rather than look to win the fight. Arias was spoiling to survive the rounds by holding, using head movement and moving around the ring. The combination of all of those things made it nearly impossible for Jacobs to land much of anything.

Jacobs came into the fight having lost his last fight against middleweight champion Gennady “GGG” Golovkin on March 18. Jacobs was a lot more effective tonight, and much more aggressive with the weaker 27-year-old Arias. It’s quite clear why Jacobs hand selected Arias as his opponent rather than someone with power. Arias didn’t have anything to cause Jacobs any problems when it came to his power.

Jacobs was able to land some 2 or 3 good shots in each round, but that’s about it. Arias used head movement and clinching to keep Jacobs from landing his best punches. When the two of them were in the clinch, Arias would smash Jacobs to the side of the head repeatedly. Arias’ best punches in the fight were when he was holding Jacobs.

The judges scored the fight 118-109, 120-107 and 119-108. The low point for the fight was the referee blowing a call in the 11th round in giving Jacobs credit for a knockdown in which he landed a beautiful punch to the back of Arias’ head. The referee standing right in front of the action, and yet he couldn’t see the punch hitting Arias in the back of the head. Arias hurt his ankle during the pseudo knockdown.

Jacobs looked bigger in the shoulders in this fight compared to in his last fight with Golovkin. I don’t think the extra size helped Jacobs. He wasn’t quite as fast as he’d been in the past, and he wasn’t as agile. If Jacobs is going to continue to hit the weights, he might find it difficult for him to make 160.

Neither fighter was hurt. Arias tagged Jacobs with at least one big punch in each round. Jacobs took the punches well without getting hurt.

Jacobs made it known after the fight that he will be attending the Billy Joe Saunders vs. David Lemieux scrape next month to try and get the winner of the fight.