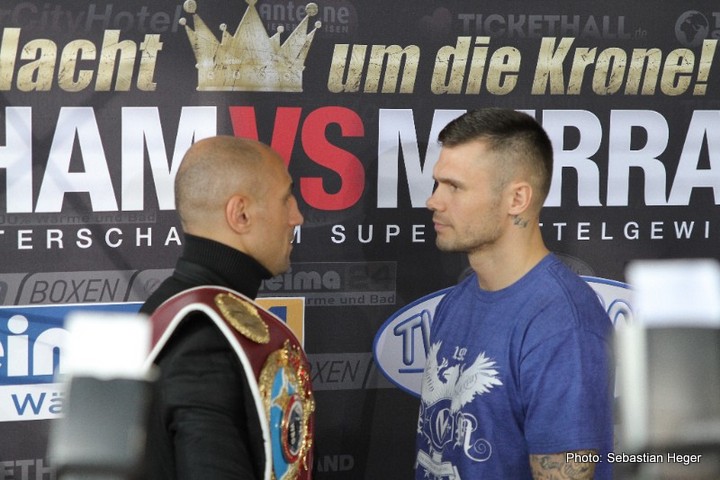 Britain’s Martin Murray is confident that he will be treated fairly by the officials in Germany tonight, ahead of his challenge to home fighter and WBO super-middleweight champion, Arthur Abraham.

No stranger to travelling throughout his career, Murray tonight arrives in Hannover for his 4th crack at a world title, after 3 previous attempts at middleweight went against him, including a previous visit to Deutschland in 2011 when he was held to a draw by then champion and adopted German, Felix Sturm.

Over the years Germany has become the subject of much debate regarding hometown fighters winning controversial decisions, with Brit’s particularly wary of injustice, perhaps most famously because of Robin Reid’s 2003, 168lb world title clash with home champion, Sven Ottke, which has to stand as one of the worst cases of officiating in recent memory.

Only last September, Liverpool’s Paul Smith ran Abraham close, losing a decision perceived as controversial before going on to be beaten decisively in the rematch, yet Murray is adamant that he will be given a fair shake in front of the partisan German crowd, agreeing with the sentiment that things aren’t as bad in Germany as people think they are.

“Even though I’m against the judges this time, I’m not some kind of unknown quantity that they can rip off and nothing will be done about it,” he said to Sky Sports. “I’m an established and proven world class fighter now so I think the fight will be scored fairly.

“I’m going in to this fight thinking I could retire if I’m beaten and it’s spurring me on because I’m not ready to retire.”