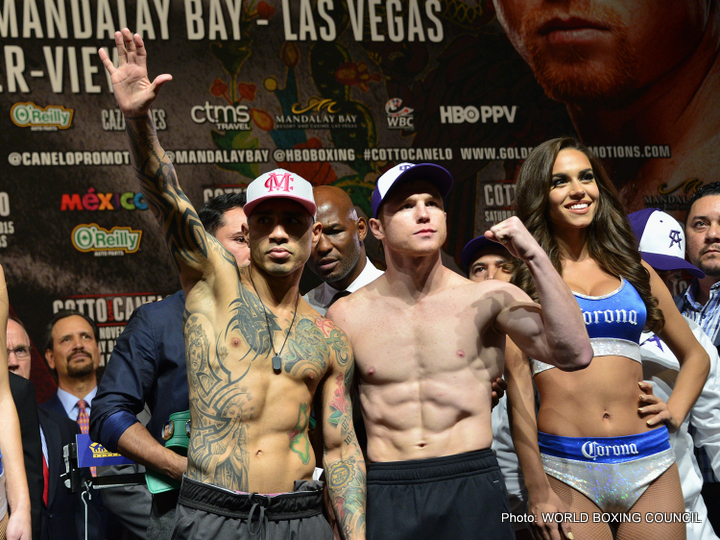 Atlas, who has just enjoyed a successful corner debut with Bradley, initially believed that Canelo was going to be too young and strong for Cotto, although having watched the Mexican come in bang on the 155 c/w limit, Atlas feels the hugely popular young star looks drained.

“I came here to say Canelo was too big, too young, too strong,” he told fighthub.tv. “But I don’t know if I can say that anymore. I watched the weigh-in, [Canelo] was drawn, he really was and that concerns me.

“I understand those dimensions of this business and how they can affect a fight. I think the pendulum just swung on the side of Cotto.”

The fact that Atlas believes Alvarez looks drained at 155 lends credence to the argument he would have no problem facing WBA/IBF & interim WBC champ, Gennady Golovkin at the right and proper 160 lb limit; something he appears reluctant to do, claiming he isn’t a true middleweight.

Should Cotto win tonight then Golovkin automatically becomes champ thanks to his not paying the WBC sanctioning fees; a situation Atlas can see becoming a reality.

“We’ve already seen Canelo get exposed in the area of slow feet. I think we’ve seen it, or I’ve seen it from my perspective anyway. Roach is gonna do a great job of having the right fight plan and having Cotto ready.

“What [Canelo] needs to do is use his legs a bit … Im not comparing Mayweather to Cotto but Mayweather exposed one of the flaws of Canelo – again, slow feet. He doesn’t close gaps very well, he really doesn’t.

“Cotto won’t be Pernell Whitaker or Mayweather in there, but he can box a bit. I’m sure Freddie being so smart will have him box a bit, moving a bit, keeping Canelo off balance and at bay and take advantage of those cement feet.

“I’d be shocked if he doesn’t do that and get a good lead early. Canelo will have to come on down the stretch.

“Will he have enough in the tank if he killed himself to make weight? Maybe not, and Cotto can pull off a nice upset.”