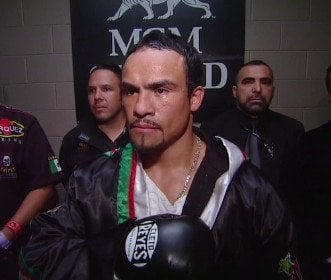 Mexican modern great, Juan Manuel Marquez has spoken out ahead of tonight’s Mexico v Puerto Rico catch-weight clash between Miguel Cotto and ‘Canelo’ Alvarez, to wisely state ‘experience will be the key.’

Marquez, ostensibly now retired following injury, though refusing to confirm or deny as much, was keen to state if the fight is in any way close, that it could well be the 35 year old Puerto Rican who emerges the victor, thanks to his top-level experience, which far exceeds that of the younger Alvarez.

“There’s a question of experience and a question of boxing technique,” Marquez said via fighthype.com regarding just how the fight may play out.

“[Calling it] 50/50 is good but an important factor here is experience. There are [actually] 3 important points; experience, level of opposition both have [previously] faced, and youth.

“When you have a fight at this level and it’s close, experience is what really counts.”

After both fighters made weight yesterday, Mexico’s Alvarez is still the firm favourite with the oddsmakers to win the WBC middleweight strap, with Cotto being de-recognised as champion by the sanctioning body after failing to negotiate a reduction in the $300k fees that were to be paid on top of around $800k in step-aside cash to interim WBC boss, Gennady Golovkin.

In the event of a Cotto victory, it will be Golovkin who is promoted to full champion status to add to his WBA and IBF 160 lb trinkets, although Marquez is refusing to rule out his countryman, who he says isn’t lacking in the desire to make his nation proud.

“[Canelo] has what it takes to triumph, I think he’s confident and has prepared well,” he said. “If he is to win, it’ll be a very important triumph for the Mexican fighter.”