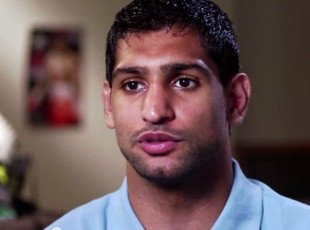 Amir Khan (28-3, 19 KO’s) says he received a personal phone call from Floyd Mayweather Jr. recently and told by him that he’d be one of his last three fights of his career. Mayweather didn’t say at which point that Khan would get a fight against him, but it’s likely to be sooner rather than later depending on how things go with Khan’s fight against veteran Luis Collazo on the undercard of Mayweather’s unification bout against WBA welterweight champion Marcos Maidana on May 3rd.

The chances are high that if Khan destroys Collazo in impressive fashion, he’ll wind up facing Mayweather at the end of the year if Khan’s schedule permits.

“A couple of weeks ago, Floyd came on the phone and said, ‘Hey champ, how are you doing?’ That was a great opening line, and it showed he is a respectful guy away from the camera,” Khan said to the Daily Mail. “He then said, ‘That didn’t happen, but don’t be disappointed. You are one of the names I want to fight, and I know you are a big star. The fight will happen.’ He said he’s got three fights left in his career and that I would be one of them.”

So there it is. Khan has been personally told by Mayweather that he’ll get his big fight against him, and he can finally end his endless talking about the mythical fight against the star. The only thing that could potentially wreck Khan’s dream fight against Mayweather is if Luis Collazo knocks him senseless on May 3rd, as he did Victor Ortiz last January in his 1st round knockout win over him.

With the way that Collazo was sitting down on his hooks, it’s quite possible that he could knock Khan out in this fight. Collazo showed similar power to Danny Garcia and Breidis Prescott, two fighters who destroyed Khan in the past.

If Khan doesn’t get Collazo out of there as quickly as possible on May 3rd, we could see Collazo reduce the British fighter’s chin to rubble on the MGM Grand canvas in Las Vegas. While Golden Boy Promotions won’t admit it at the time that would be pretty much the end of Khan’s career at that point in terms of him being a relevant fighter.

One thing that Khan likes to do is look past his opponents towards bigger fights that he dreams about. He’s like someone celebrating Thanksgiving while dreaming about the presents he’s going to be getting on Christmas. instead of being satisfied with the big turkey and dumplings he has one his plate, he’s thinking about other stuff. I can see Collazo knocking Khan’s dreams out of his head on May 3rd and bringing him snapping him back to reality.