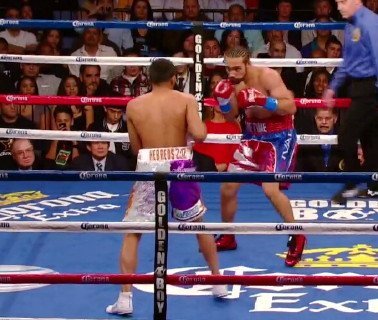 Julio Diaz (40-9-1, 29 KO’s) will be facing interim WBA welterweight champion Keith Thurman (22-0, 20 KO’s) next on 4/26 at the StubHub center in Carson, California in a fight that will be broadcast by Showtime. It looks like Al Haymon and Golden Boy Promotions don’t want to take any chances that Thurman, 25, doesn’t get beaten before he gets his title shot against the WBA welterweight champion.

Thurman gets an easy fight against Diaz, who is coming off of back to back losses to Amir Khan and Shawn Porter. That’s rare to have a fighter with two straight losses fighting against a champion, even an interim title holder like Thurman. I wonder how many more times Diaz will get used in this fashion, because at some point it’s going to look really bad having him brought out to face Golden Boy’s fighters with so many consecutive losses.

Thurman has recent wins over Jesus Soto Karass, Diego Chaves and Jan Zaveck. While some fans would argue that Diaz is a good opponent for Thurman, but he’s really not given that Thurman still needs to be building his name up against quality opposition with a name, Diaz is someone who stopped being relevant years ago after he lost his IBF lightweight title to Juan Diaz in 2007. Since then, Diaz has lost to Kendall Holt, Rolando Reyes, Victor Cayo, Khan and Porter. He’s beaten some guys since 2007, but the only recognizable name among his wins was against Herman Ngoudjo.

Thurman is going to give Diaz a pounding in this fight, and I just hope he doesn’t hurt him too bad because Diaz is someone that left his best days behind in the rearview mirror a long time ago.

Golden Boy and Haymon seem like they’re going to take it easy with Thurman until he gets a title shot against whoever emerges as the WBA champion from the Floyd Mayweather Jr. vs. Marcos Maidana fight. I don’t see Mayweather wasting his time fighting Thurman if he beats Maidana, because Golden Boy and Thurman haven’t built up Thurman’s name by matching him against well-known opposition.

Mayweather will ignore Thurman for the last year of his career, and either sit on the WBA title in defending it against other guys or vacate it altogether. I don’t see Thurman getting a shot at the WBA belt until it gets vacated in 2015 or 2016. In the meantime, I hope Thurman’s handlers start putting him in with better opposition because I think his career is being stunted by having him matched against guys like Diaz, Thurman and Soto Karass.