David Haye, along with Evander Holyfield and Oleksandr Usyk, is a member of a most exclusive club, where membership is only attainable if you are a fighter who managed to win a world title at both cruiserweight and heavyweight. Haye was at his best as a cruiserweight, his impressive KO wins over Jean-Marc Mormeck and Enzo Maccarinelli seeing “The Hayemaker” at his most destructive.

And, when asked recently by ID Boxing who would have won in a fight between the prime Haye and the cruiserweight version of Usyk (who as we know, became the first man in history to win all four major belts at 200 pounds – WBC WBA IBF WBO), Haye said he would have “found a way to get to him.” Of course, when any retired but still proud former champ is asked if he would have beaten so and so, the answer is almost always going be, ‘yeah, I would have beaten him.’ 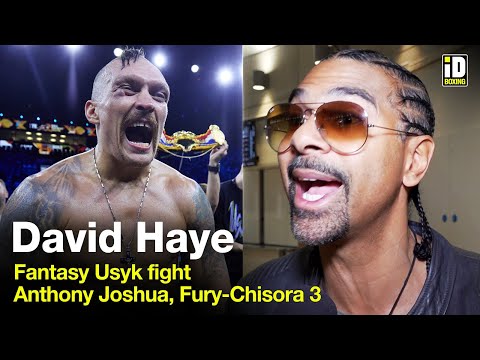 Still, Haye makes some interesting points about a mythical match-up between he and Usyk.

“Yeah, I’d like to believe in my prime – the night if fought Enzo Maccarinelli or Jean-Marc Mormeck – the speed and the timing,” Haye said when asked if he would have beaten Usyk, a man who has, of course, never lost a pro fight. “And I always liked southpaws; the right hand landed. Watching Tony Bellew fight Usyk, Bellew was controlling the fight while he was there. If he was younger, if he was fresher, he could’ve done a lot better. If I put myself in that same fight with Usyk and Tony – take Tony out and put my prime in there – I think I’d have definitely have got that guy out of there. It would’ve been tricky, it would’ve been hard, but I would’ve found a way to get to him, and I wouldn’t have allowed some of the stuff he does to some of these bigger heavyweights. The stuff he did to Anthony Joshua, he wouldn’t have been able to do to me because I’m quicker than he is.”

It would certainly have been an interesting fight: Usyk-Haye at either weight, cruiser, or heavyweight. Haye is, fairly or unfairly, remembered today, by a good number of fans, as a potential great who fell short by some margin. But it has to be remembered that Haye’s letdown performances came at heavyweight (the most criticized bout of his being his poor showing against Wladimir Klitschko, and then, of course, his two stoppage losses Haye fell to at the hands of Bellew; although Haye showed enormous heart in the first fight with Bellew when he fought through the pain of a torn Achilles.)

As a cruiserweight, Haye lost just once, this to Carl Thompson when Haye was still green, still learning. At his best, Haye was a lethal combination of speed, accuracy, and punching power. Usyk is a real bag of tricks, and he was so at cruiserweight also. Thinking hard about this particular Dream Fight lets a fight fan come to the conclusion that this one would have been very, very competitive. And a tough fight to call.

Haye on points or Usyk on points seems to be the most logical outcome. What do you guys think?