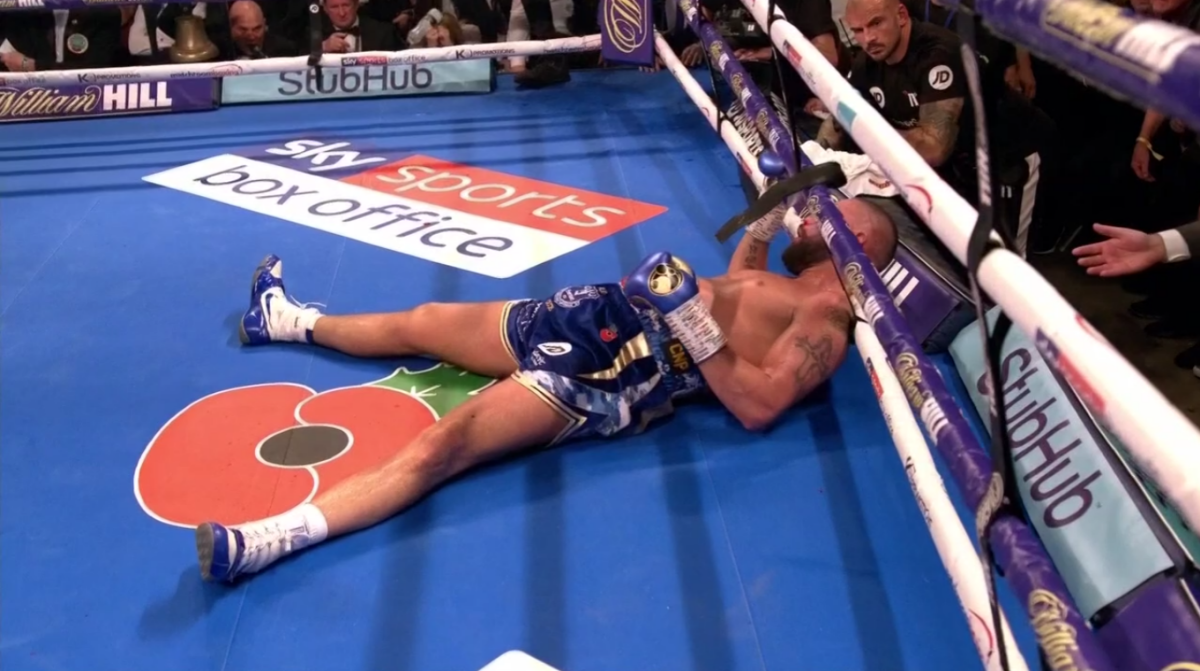 As many expected would happen, unified IBF/WBA/WBC/WBO cruiserweight champion Oleksander Usyk (16-0, 12 KOs) drilled Tony Bellew (30-3-1, 20 KOs) to the canvas in knocking him out in the 8th round on Saturday night in their highly anticipated fight on DAZN and Sky Box Office at the Manchester Arena in Manchester, UK.

Usyk stunned Bellew with a left hand early in the 8th. Once Usyk had Bellew hurt, he continued to nail Bellew with lefts until he hit the deck on his back.

Bellew was completely out of it and unable to rise to the canvas. Referee Terry O’Connor was forced to step in and waive off the fight at 2:00 of round 8. All in all, it was a good effort from the 35-year-old Bellew, who was ahead at the scorecards at the time of the stoppage. Belle was landing the better shots until Usyk took over the fight in the 6th, and finished the job in the 8th.

With the win, Usyk (16-0, 12 KOs) retains his IBF, WBA, WBC and WBO cruiserweight titles, which he is now expected to vacate so that he can move up to heavyweight to go after a title shot against IBF/WBA/WBO champion Anthony Joshua (22-0, 21 KOs) in the near future. Unlike WBC heavyweight champion Deontay Wilder, who isn’t promoted by Matchroom Boxing promoter Eddie Hearn, it should be a piece of cake for Usyk to get a title shot against Joshua, considering that he’s also promoted by Hearn.

“Oleksandr come here, You are a great champion and it was an honor to share the ring with you,” Bellew said afterwards. “I tried my best and gave it everything. Usyk is a great, great champion. He beat me fair and square, I have no excuses. Oleksandr is the greatest man I have ever shared a ring with. Only the very best and very greatest will find a way to beat him.”

Bellew, 35, was going a little overboard in pouring on the compliments after the fight, as there’s no way that Usyk did a better job against Tony than Adonis Stevenson did in knocking him out in the 6th round in 2013. The difference between the way Stevenson fought Bellew and the way Usyk did was the aggressiveness with ‘Superman’. Stevenson was willing to take shots from Bellew to land his own hard power shots to get him out of there. Stevenson wasn’t afraid. In contrast, Usyk looked very afraid of getting hit by Bellew until the 6th, and that was when he became more courageous. Once Usyk lost his fear of Bellew, it was only a matter of time, given that he hitting him with shots that clearly bothering him and sapping the strength out of his 35-year-old body.

Bellew is supposed to be retiring after tonight. We’ll need to see if that turns out to be the case. It’s always possible that he’ll take confidence from his performance against Usyk and decide to resume his career. It might be better off for Bellew to call it a day. If he had fought some of the braver cruiserweights, who aren’t afraid to get hit, he probably would have been knocked out faster. Guys like Yunier Dorticos, Murat Gassiev and Mairis Briedis are more powerful than Usyk, and they’re not afraid to get hit. Bellew would have had his hands full against any of those three if he had shared the ring with them tonight.