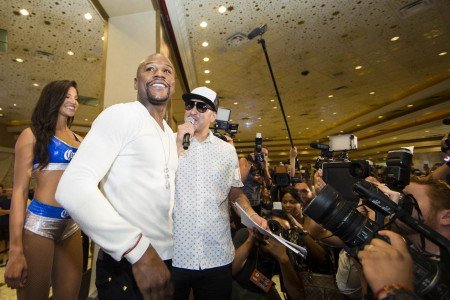 (Photo credit: Esther Lin/Showtime) As far as trainer Floyd Mayweather Sr is concerned there’s really no point in his son WBA/WBC welterweight champion Floyd Mayweather Jr (46-0, 26 KOs) fighting Marcos Maidana (35-4, 31 KOs) in a rematch this Saturday night because he thinks that Mayweather Jr already clearly beat Maidana last May, and he doesn’t see there being any reason for a rematch.

Floyd Sr. didn’t agree with the fight being scored as a 12 round majority decision obviously. He saw the fight as a definite victory for Mayweather.

Mayweather chose to fight Maidana again because he wanted to show the fans that he could beat him easier the second time around. Mayweather isn’t saying this but he really didn’t have any other interesting options in terms opponents to fight. Amir Khan was unavailable, Shawn Porter suffered a defeat, and Kell Brook and Keith Thurman don’t have big enough names for Mayweather to fight them.

The Mayweather-Maidana fight should bring at least 800,000 pay-per-view buys at the minimum, and those are good numbers considering the opponent that Mayweather is dealing with. Obviously, Mayweather is going to need to fight the likes of Saul “Canelo” Alvarez, Miguel Cotto or Manny Pacquiao if he wants to bring in over 1 million pay-per-view buys.

A fight between Mayweather and WBA middleweight champion Gennady Golovkin would likely bring in over 1 million PPV buys as well, but Mayweather isn’t about to fight a dangerous guy like Golovkin. He’s got too much size and power over Mayweather for a fight between them to take place.

Speaking about the way Mayweather fought Maidana last May by punching with him, Floyd Sr said “That would have never been my strategy, never ever. I think the strategy was wrong. I had nothing to do with it. He [Mayweather] picked that upon himself. I would never have my son fight like that.”

Mayweather wanted to make it an entertaining fight and he accomplished that goal, but it also brought a load of criticism to Mayweather from fans and certain people in the media who feel that he’s over-the-hill now. Mayweather is going to need to prove to those fans on Saturday night that he’s a lot better fighter than the one that beat Maidana the last time they fought.