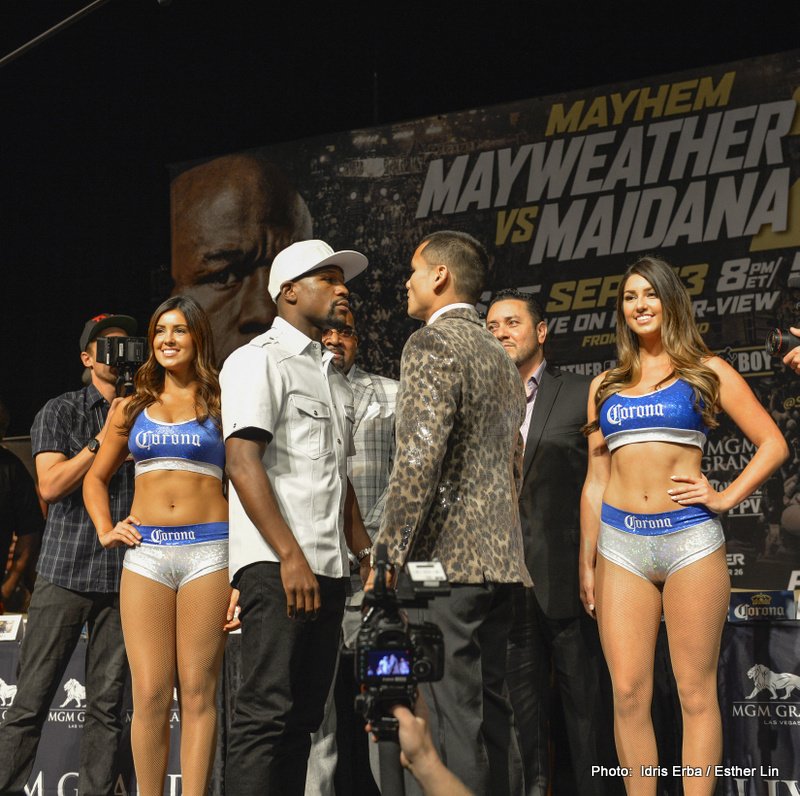 Marcos Maidana (35-4, 31 KOs) says he’s ready to fight hard for 12 rounds on Saturday night, but he plans on pacing himself more against WBA/WBC welterweight champion Floyd Mayweather Jr (46-0, 26 KOs) this time instead of using up all of his fuel in the first 6 rounds like we saw last May. Mayweather and Maidana will be squaring off on Showtime pay-per-view in this highly anticipated rematch at the MGM Grand in Las Vegas, Nevada.

Maidana is supposedly coming into the fight at a lighter weight this time. Just how much lighter is unknown, but if he comes into the fight at below 155, then he can probably forget all about winning or doing well. Maidana’s No.1 advantage last May in his previous fight against Mayweather was his weight. Maidana came into the fight weighing 165 pounds against the 150 pound Mayweather, and that extra weight gave Maidana the ability to manhandle Mayweather for parts of the fight.

“I am ready to make history,” Maidana said today at the final press conference at the MGM Grand in Las Vegas, Nevada. “I am very well prepared. I know him already. It’s going to be a big advantage for me. I’m going to pace myself this time. I’m not going to waste punches. Nobody has never knocked me out before. I hope he takes advantage of it and tries to knock me out because I know I will. I’m ready for anything. I’m ready to go 12 rounds. I’m ready to stop him if I land the right punch.”

Maidana is hoping Mayweather will try and score a knockout because he wants him to punch with him. That’s Maidana’s best chance of winning this fight if he can get Mayweather interested in slugging. The only way Mayweather is going to be able to score a knockout is if he throws to the body and spends entire fight aiming his shots down there, because Maidana has a good chin and can take a lot of punishment.

Mayweather said “Did he deserve the rematch? Absolutely. The fans deserved the fight. We’re going to have a great game plan. I know for me to be 46-0, I’ve got to be doing something right. As of right now, that’s how I’m feeling [about retiring next year]. That’s how I’ve been feeling lately. It’s all about blood, sweat and tears and that’s what the fans will see Saturday night. I’m a true champion and a true champion never backs down.”