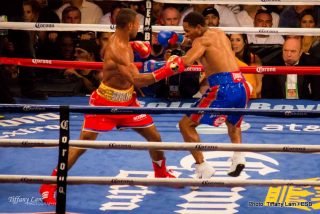 There’s something about the atmosphere at the StubHub Center when the sun has fallen and it’s time for the main event! Over 7,000 fans came out to watch American Shawn Porter defend his welterweight title against England’s Kell Brook. The Brit made his way to the ring first, practically jogging his way through the crowd and between the ropes, looking eager to get it on. Porter’s ring walk was slow and calculated, making his opponent wait for him. Jimmy Lennon announced the fighters in his classy, unique way. Brook drew boos from the partisan crowd, yet had plenty of British supporters making their presence felt.

Porter came out with a lot of energy, trying to get inside on his taller opponent and work the body. Brook seemed content to hold and back up; while Porter looked like a pit bull in the early going. In the second round a clash of heads caused a small cut over Brook’s left eye, yet his cut man did a great job with it. 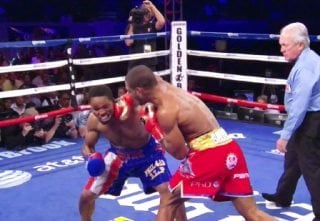 Shawn Porter (24-1-1, 15 KOs) lost his IBF welterweight title last night in losing by a 12 round majority decision to visiting fighter Kell Brook (33-0, 22 KOs) at the StubHub Center in Carson, California.

Porter, 26, says he wants a rematch so that he can avenge his defeat and recapture his title. Porter doesn’t think Brook did enough to take his belt based on his performance last night. Porter thinks Brook did an awful a lot of holding during the fight to prevent him from getting his shots. 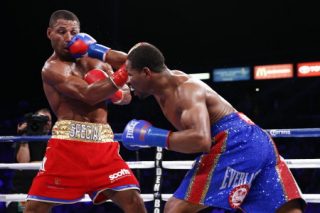 (Photo credit: Esther Lin/Showtime) Newly crowned IBF welterweight champion Shawn Porter (33-0, 22 KOs) won’t be facing Amir Khan or any of the other big names in the 147 pound division in his first defense in November or December, because his promoter Eddie Hearn from Matchroom Sport wants to save the big fights until 2015 for some reason.

Last Saturday night, Brook defeated IBF welterweight champion Shawn Porter (24-1-1, 15 KOs) by a 12 round majority decision to win his IBF title in front of a large crowd at the StubHub Center in Carson, California. 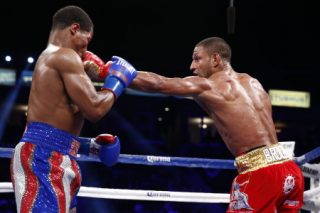 In a minor upset, Britain’s Kell Brook (33-0, 22 KOs), of Sheffield, England, won a battle of undefeated welterweights and the IBF world title with a majority 12-round decision over defending champion “Showtime” Shawn Porter (24-1-1, 15 KOs), of Cleveland, Ohio, Saturday on SHOWTIME from StubHub Center in Carson, Calif. 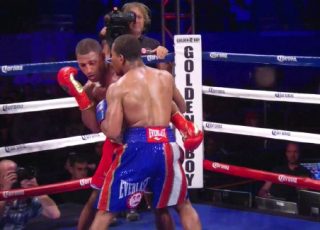 Thurman feels that the judges focused more on Brook landing the cleaner landing shots rather than the high volume punching from Porter. The judges gave it to the guy with the better power, in other words. 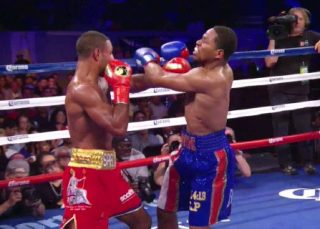 Kell Brook (33-0, 22 KOs) defeated IBF welterweight champion Shawn Porter (24-1-1, 15 KOs) by a 12 round majority decision to take his IBF 147 pound title at the StubHub Center in Carson, California. The final judges scores were 114-114, 117-111, 116-112. In my view, I had Porter winning a comfortable decision.
I couldn’t more than 2-3 rounds to Brook because he just holding and missing shots all night long. Brook landed 1-3 good shots in each round, but Porter was landed 15-20 good punches each round while fighting through the constant clinching by Brook.

It looked like the judges gave Porter zero credit for his body punching in the fight, because he was nailing Brook with good body shots in the inside, as well as head shots while fighting through clinch after clinch. 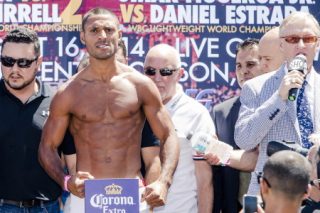 (Photo credit: Esther Lin/Showtime) Amir Khan sees a victory by Britain’s Kell Brook (32-0, 22 KOs) tonight against IBF welterweight champion Shawn Porter (24-0-1, 15 KOs) as opening the door for a big fight between the two of them in the UK in the near future.

Khan isn’t saying precisely when he wants to face Brook, but you’ve got to figure that it would need to happen fairly soon. Brook doesn’t have the kind of talent to hold down the WBA title for long if he were to face the likes of Keith Thurman, Floyd Mayweather Jr or Manny Pacquiao. You’d have to favor all three of those fighters to beat Brook if a fight were made.

Fans, media, fighters and their teams gathered at the StubHub Center in Carson, California this afternoon, as the official weigh-ins for tomorrow’s Showtime Boxing tripleheader took place.

Figueroa returns to the StubHub Center, where he narrowly escaped with a controversial split decision victory over Jerry Belmontes in April. For Estrada, this is his first bout outside of his native Mexico, and easily the biggest stage he’s ever fought on. Estrada hit the scales first, weighing in at 134.5 pounds; while Figueroa came in right at the lightweight limit of 135 pounds.