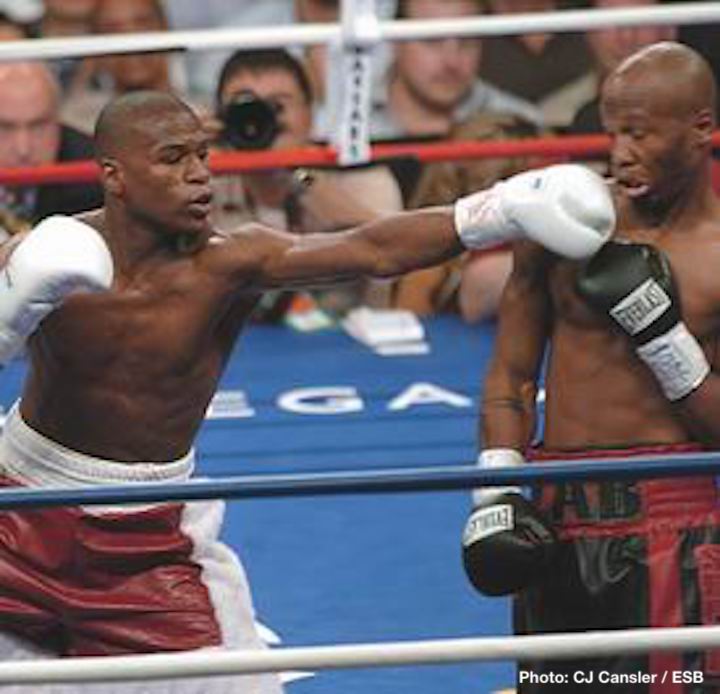 In April of 2006, at The Thomas and Mack Centre in Las Vegas, friends turned rivals Floyd Mayweather Junior and Zab Judah met, with the unbeaten “Pretty Boy” (as Floyd was known back then, not yet having adopted his “Money” moniker) defending his IBF welterweight crown. This was a fascinating fight, one that could have been dubbed “Speed Vs. Speed.” Indeed, it could be argued that Judah was Mayweather’s fastest ever opponent.

The fight proved memorable for a number of reasons:

Mayweather, then aged 29, was sporting a perfect 35-0(24) ledger and he was one fight removed from his most high profile fight yet; a crushing of the massively popular Arturo Gatti, this win turning Floyd into a Pay-Per-View star. Southpaw Judah, aged 28 and holding a 34-3(25) record, was actually coming off a loss; an upset points defeat to the largely unheralded Carlos Baldomir.

Despite the January 2006 loss to Baldomir, a defeat that cost Zab his WBC welterweight crown, the Mayweather fight – dubbed “Sworn Enemies” – went ahead, with respective promoters Don King (Judah) and Bob Arum (Floyd) re-working the bout. Before the fight, most notably in 2004, Mayweather and Judah had sparred together. Reports from the April 2004 session stated how Mayweather, then in training for another southpaw in DeMarcus Corley, had dominated Judah in the gym session, forcing the spar to be stopped to save Zab from a beating. This event, Dan Rafael of ESPN wrote, all but ended the friendship the two welterweights had previously enjoyed.

Judah had a strong start in the actual fight, troubling Floyd with his own sizzling hand speed, even appearing to score a knockdown in the second-round. Mayweather’s glove touched the canvas after a Judah hook scored, but referee Richard Steele did not issue a count. There would be further controversy to come.

After having problems with his rival’s quickness and southpaw stance, Mayweather took control in the fifth-round. By the seventh-round, Zab’s nose was bleeding and he was being backed up by the physically stronger Mayweather. Now ahead on the cards of most ringside observers, Mayweather saw all hell break loose in the tenth-round. Judah belted “Pretty Boy” with a hard low blow, followed by another illegal punch; this one to the back of Mayweather’s head.

Floyd was in obvious distress and referee Steele immediately called for a time-out. At this point, Floyd’s uncle and trainer Roger piled into the ring and confronted Judah. Seconds later, the ring was filled with bodies, chaos now the order of the day.

Along with Roger Mayweather, Yoel Judah, trainer and father of Zab, climbed into the ring to take part in the melee; even throwing a punch at Mayweather‘s uncle. Leonard Ellerbe, Floyd’s right hand man, was also involved in the ugly scene. Eventually, after a substantial amount of time, the ring was finally cleared and the fight resumed.

The final two rounds were largely uneventful, with Mayweather, having regained his composure, choosing to take no risks in cruising to a points victory he was certain he had in the bag. Despite the earlier nastiness, the two fighters even touched gloves and embraced ahead of the final three-minutes.

After the fight, the recriminations began. An April 13th hearing held by the Nevada State Athletic Commission handed out hefty fines to Roger Mayweather ($200,000) both Zab and Yoel Judah ($350,000 and $100,000 respectively) and to Leonard Ellerbe ($50,000). In addition, the licences of Roger Mayweather and both Judah’s were revoked for a year, with Ellerbe’s license being suspended for four months.

Shortly after his 2006 win over Baldomir later that year, Floyd Mayweather said he had seriously considered retiring after the win over Zab Judah. As we all know, he couldn’t bring himself to do so.

Ben Askren: It's embarrassing, I got knocked out by Jake Paul
Follow @eastsideboxing