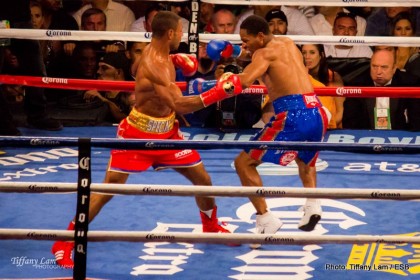 There’s something about the atmosphere at the StubHub Center when the sun has fallen and it’s time for the main event! Over 7,000 fans came out to watch American Shawn Porter defend his welterweight title against England’s Kell Brook. The Brit made his way to the ring first, practically jogging his way through the crowd and between the ropes, looking eager to get it on. Porter’s ring walk was slow and calculated, making his opponent wait for him. Jimmy Lennon announced the fighters in his classy, unique way. Brook drew boos from the partisan crowd, yet had plenty of British supporters making their presence felt.

Porter came out with a lot of energy, trying to get inside on his taller opponent and work the body. Brook seemed content to hold and back up; while Porter looked like a pit bull in the early going. In the second round a clash of heads caused a small cut over Brook’s left eye, yet his cut man did a great job with it.

Porter continued to apply relentless pressure and tried to work his way out of every clinch. Brook was doing a lot of holding and leaning, but it was tactical and effective. In the process of frustrating his opponent, he was also tiring Porter into the middle rounds. In the sixth another head butt cut Porter over his right eye. His cut looked worse than Brook’s, and it would continue to bleed for the rest of the fight.

After giving away several of the early rounds, Brook had gradually taken control of the fight. Porter was still more aggressive, yet he was fighting sloppy and letting himself get tagged on the way in. The Akron Ohio native had abandoned his jab and was simply diving in. The clean body work he had utilized in the early going was suddenly nonexistent. Brook showed some craft, using his head and shoulders on the inside to work Porter’s cut eye, and landed the crisper punches. This was a close fight going into the championship rounds but you got the sense Porter had fallen behind. The late rounds were sloppy, but Brook clearly did the better work. The final bell rang with a tense feeling in the air as it seemed boxing fans were in store for another close, controversial decision.

Jimmy Lennon announced the judges’ scores to an anxious crowd. One judge scored it 114-114, while the other two had it 117-111 and 116-112 for the winner….and NEW welterweight world titlist, Kell Brook of England. Shawn Porter landed 154 total punches, but he had to throw 626 to do so (25%); whereas Brook landed 158 of 441 punches (36%). Other than being more accurate, Brook landed the cleaner shots and controlled the fight from the middle rounds on. Brook returns to the UK with an alphabet title, improving his record to 33-0 with 22 stoppages. For Porter it’s back to the drawing board, as he suffers his first pro loss and drops to 24-1-1 with 15 KO’s.