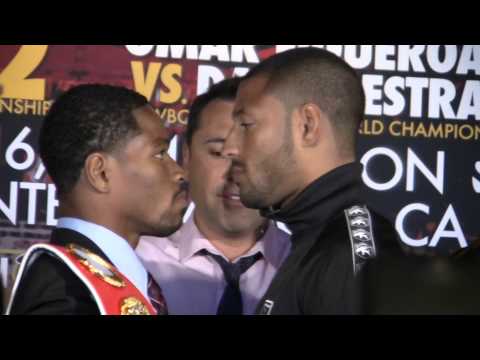 British welterweight Kell Brook’s moment of truth is just one day away before he faces IBF welterweight champion Shawn Porter (32-0, 22 KOs) on Saturday at the StubHub Center in Carson, California.

Brook, 28, has spent 10 years of his long career building up to this moment and now it’s his time to show whether he belongs at the world level or if he’s just another fighter with inflated record courtesy of long years of weak match-making to keep him unbeaten.

Brook says he’s willing to do anything he has to try and win. Well, he may indeed need to do that on Saturday night if he discovers that boxing Porter from the outside is a fail. In that case, Brook will need to mix it up with Porter to try and out-slug him. Brook looked horrible in one fight in his career where opponent forced his way to the inside and exposed him in his first bout against Carson Jones.

“It’s time for me to get in the ring and show the world that I am the best,” Brook said via skysportscom. “I think at times it will end up in a dog fight in there but I am a more polished boxer and I’m ready to do dog-fight… I’m ready to do anything to get a victory. Victory this weekend gives me a world title which will open the doors at the elite level of the sport… something I have always wanted.”

Hopefully, Brook’s promoter Eddie Hearn has a backup plan for Brook to go in another direction in case he loses on Saturday night to Porter. It would be a shame to see Brook put back on another long cycle of him facing lesser fighters and wasting his career without getting title shots. He won’t get a shot at WBC champ Floyd Mayweather or WBO champ Manny Pacquiao. But Brook could move up to 154 and look to fight in that division.

That might be his best bet if Porter exposes him on Saturday. If Brook loses the fight, he’ll have to wait until Pacquiao and Mayweather retire before gets a shot at those titles, and he obviously would be wasting his time in fighting Porter again. But in moving up to 154, Brook would have a good chance of picking up a belt in that division.