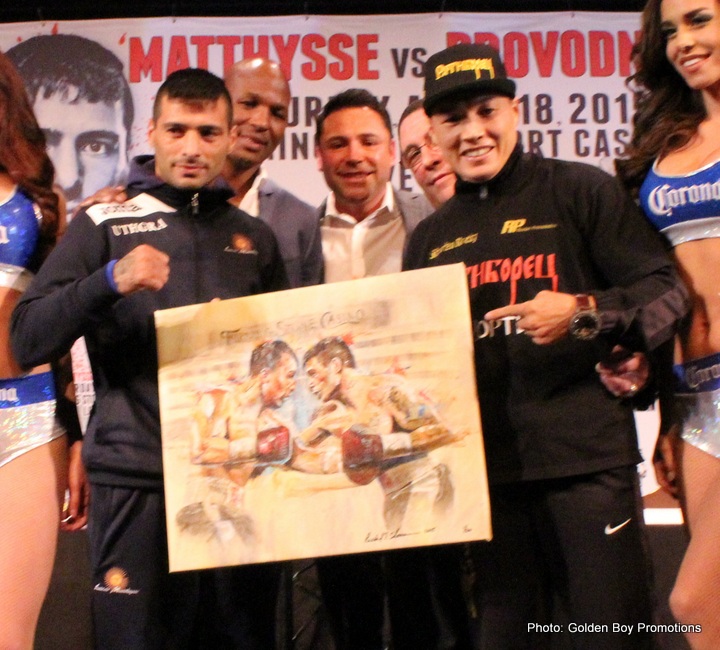 This Saturday night Turning Stone Resort and Casino will host an HBO event that will likely be the leading candidate for fight of the year by night’s end. Stylistically speaking this is as close to a hardcore-fight fans dream matchup as any other on the busy spring fight schedule. Lucas “The Machine” is set to do battle against Ruslan “The Siberian Rocky” Provodnikov with the victor possibly facing the co-feature bout winner between Terrance Crawford and Thomas Dulorme. Who will survive this firefight that promises to produce enough electricity to light up all of New York City?

Ruslan Provodnikov came up the hard way both in and outside the ring. From his humble begins as a member of a communal tribe in Western Siberia to grinding his way up the ranks on ESPN2’s Friday Night Fights. Ruslan has out kicked his coverage long ago and overachieved beyond his natural skill set. His coming out party was a war with Timothy Bradley now two summers ago. He followed that narrow-points loss to Bradley with an obliteration of Mike Alvarado.

With a potential PPV fight against Manny Pacquiao on his radar Ruslan had to clear one last hurdle versus new to the world scene, Long-Islander Chris Algieri. Provodnikov began that fight looking every ounce of the 8-1 favorite he was booked. However, he wasn’t able to finish Algieri early which left the door open to be out-boxed. Chris’s jab and movement flustered Ruslan for the rest of the night enough to give him a 2-point victory on two of the customary three judge scorecards.

Adding salt to an already opened wound occurred when the news came down that Chris Algieri would be facing Pacquiao on PPV. Another opportunity has presented itself and it’s now up to Ruslan to kick in the door at the junior welterweight division.

Lucas Matthysse has been on the short side of the stick a few times so far in his solid pro career. He lost two split-decisions to Zab Judah and Devon Alexander. Setbacks after losing key fights can slow a fighter’s career to a snail-like pace. Luckily for Lucas the lull in momentum was short-lived after capping off several KO victories with a left hook landed in an exchange that had Lamont Peterson stuck in neutral.

After mopping the floor with a quality fighter like Peterson, Lucas set his sights on a Danny Garcia super fight in the eyes of most hardcore boxing fans. The bouts profile significantly rose when it was announced as the co-feature to the record-breaking Mayweather/Canelo Showtime PPV event. It seemed “The Machine” was being groomed to face Floyd Mayweather judging by the excitement level of former Golden Boy CEO Richard Schafer.

Lucas hurt Danny Garcia early, causing a truly awesome highlight replay of Garcia’s mouth guard being knocked out as it skimmed of the top rope and in to the crowd. Garcia began to fight fire with fire, swelling than dropping the Argentine with a body punch in the 11th round. In a close decision loss Matthysse was once again forced to go back to the drawing board.

Basically a year ago Lucas was dropped twice and cut in the early goings of his breathtaking scrap versus John Molina. Ultimately Matthysse was able to rebound from a rough patch to score an 11th round stoppage. Neither fighter was challenged in their last outing meaning plenty of time has gone by to help heel their mental and physical wounds of wars past.

When analyzing this bout a few things come to mind right off the bat. One is the fact that Ruslan Provodnikov has a grizzled-chin having never been knocked down thus far. The other key to this fight will be who can punch straighter. Generally speaking when two brawlers are matched with similar styles the guy who shortens his punch and/or uses a jab once in a while, gets his hands raised.

The case could be made that “The Machine” might be slowing down some and his punch resistance isn’t as strong against power punchers like Garcia and Molina. If that trend continues it will be a very difficult to climb out of an early hole on the cards. On the flip side Provodnikov is a stiff, stand-straight-up fighter who loads up or leaps when punching. In a bout that will surely see an abundance of exchanges on the inside, wide-punching could be Ruslan’s downfall.

Of course power blended with vulnerability is one of the main reasons why we a boxing fans tune in to see a car wreck play out. There are many slogans one could use to describe the action that will ensue. So far I’ve heard “Sledgehammers & Ambulances”. Others like last man standing or take my breath away. This scrap will live-up to its lofty expectations and be the early front runner for fight of the year. Once the opening minutes wind-off the clock the action will increase to a fever-pitch filled with momentum swings.

At first, I see Provodnikov landing his awkward overhand rights along with hooks to the body. Once Matthysse, usually a slow starter, warms up some his hooks to the head and body will add fuel to this uncontrollable fire. The amount of exchanges and flurries by both men should place the boxing world on the edge of their seats. If they can sit at all once the haymakers come out in full force.

If Lucas can weather the early storm of power punches he will than begin to apply his own pressure. A Matthysse jab will set the table for chopping right hands and heavy left hooks galore. The biggest difference between these two on offense is how each man chooses to deliver their ammunition. The straighter, shorter punching Matthysse will begin to time Provodnikov’s telegraphed arsenal. At some point, Lucas will catch Ruslan with enough flush shots causing him to retreat at times. Earmuffs will not be enough as late activity by Lucas we rule the day.

Matthysse may find himself on the mat early and will need to show resilience in order to work his way back in the good graces of the judges. Lucas’s chin will be put to the test once again and any questions of him fading or punch resistance will be answered. This back and forth fight will be filled with several memorable rounds. 50-50 matches are a rarity in today’s boxing climate so let’s sit back and enjoy what should be one hell of a battle!
My official prediction is Lucas Matthysse by Majority Decision.

Also, the co-feature on HBO between Terrence Crawford and Thomas Dulorme, all though slower-paced should be another test that Crawford will have to pass in an attempt to make a name for at 140. My pick is Crawford to win in what could be a high-speed chess match. The Showtime main event is being slept on due to the deserved hype surrounding the HBO Provo/Matty fight and the inconsistencies of Julio Chavez Jr. That said this fight being contested at 173 pounds should favor the bigger and stronger Andrzej Fonfara. I’m picking Chavez in an entertaining win on the cards.