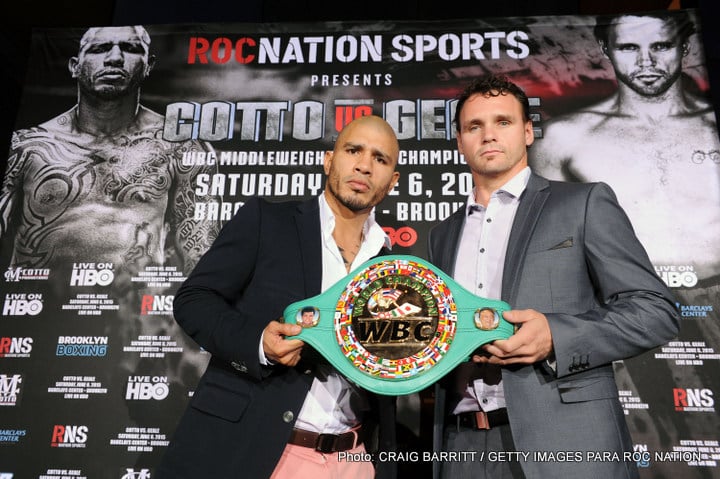 Roc Nation Sports and Miguel Cotto Promotions are pleased to announce the next highly anticipated battle for Miguel Cotto (39-4, 32 KO’s), the reigning WBC Middleweight and Ring Magazine World Champion and the first native of Puerto Rico to become world champion in four different weight classes. On June 6, 2015, Cotto will defend his titles against former Two-Time World Champion Daniel Geale (31-3, 16 KO’s) of Australia in a fight that will be televised live on HBO from Barclays Center in Brooklyn.

“I am happy and excited to be back in New York and fighting at Barclays Center,” said Cotto. “This is another chapter in my career and I’m committed to train as hard as always and bring a big victory. I’m looking forward to seeing all the Puerto Rican fans on June 6 and to being part of another exciting boxing night in Brooklyn.”

“I would like to thank HBO for their continued support, Gary Shaw of GSP, Bill Treacy of Grange Old School Boxing and Dino Duva at Roc Nation Sports for their collective professionalism in making this fight happen,” said Geale. “Last but not least, thanks to Miguel Cotto for the opportunity to become a world champion once again. I have total respect for Miguel and his achievements, but I can win this fight and that is exactly what I intend to do come June 6 in Brooklyn at Barclays Center.”

READ:  Anthony Joshua: I got beat. I was shook against Andy Ruiz
https://www.youtube.com/watch?v=-qz7TM8edss

“We’re excited and proud to bring Miguel Cotto back to New York along with Miguel Cotto Promotions, now as a part of the Roc Nation Sports family,” said David Itskowitch, COO Boxing of Roc Nation Sports. “Brooklyn and boxing have a long history, and Puerto Rican heritage is closely integrated with both. What a way for New York to kick off the week of the Puerto Rican Day Parade festivities…with Miguel Cotto’s long-awaited return to the ring. The night of June 6 will be one to remember for fans in attendance at Barclays Center and those watching at home on HBO.”

“We are excited to have Miguel Cotto back in New York and at Barclays Center for the first time,” said Hector Soto, Miguel Cotto Promotions. “This is a Puerto Rican tradition – Miguel Cotto is New York and New York is boxing. We can’t wait until the night of June 6 to present a great and entertaining boxing show together with our partners at Roc Nation Sports.”

“Daniel Geale is a true warrior and will leave everything in the ring against Miguel Cotto like he always does,” said Gary Shaw, Gary Shaw Productions. “He’s never in a dull fight and the fans will get their money’s worth as both fighters like to let their hands go. I want to thank Grange Old School Boxing for having confidence in me. This will be a tough fight for Geale, however I’m convinced that he will beat Cotto and I’m hopeful that Miguel didn’t make any other plans for September other than a rematch with Daniel.”

“We are delighted that Miguel Cotto has chosen Barclays Center and Brooklyn to continue his storied career in New York City,” said Brett Yormark, Barclays Center CEO. “Cotto’s Puerto Rican heritage combined with Australia’s own Daniel Geale is going to create a tremendous global audience for this June 6 fight. This announcement further cements Barclays Center as the leading boxing venue in this country.”

“Last June, Miguel Cotto became a middleweight champion, joining a select handful of elite fighters to have won major titles in four weight classes or more, and becoming the first Puerto Rican champion to do so ,” said Peter Nelson, vice president, programming, HBO Sports. “For Cotto’s first title defense, he faces former two-time world champion Daniel Geale at Barclays Center, the iconic Brooklyn landmark whose mystique elevates every event fortunate enough to call it home. As Cotto continues the next phase of his historic career, we are thrilled to present this middleweight championship fight live on HBO.” 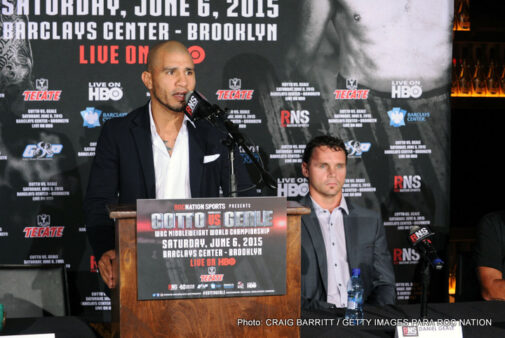 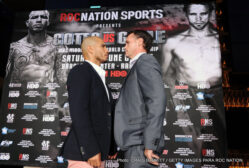 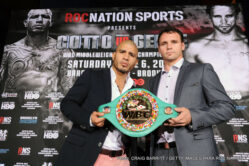 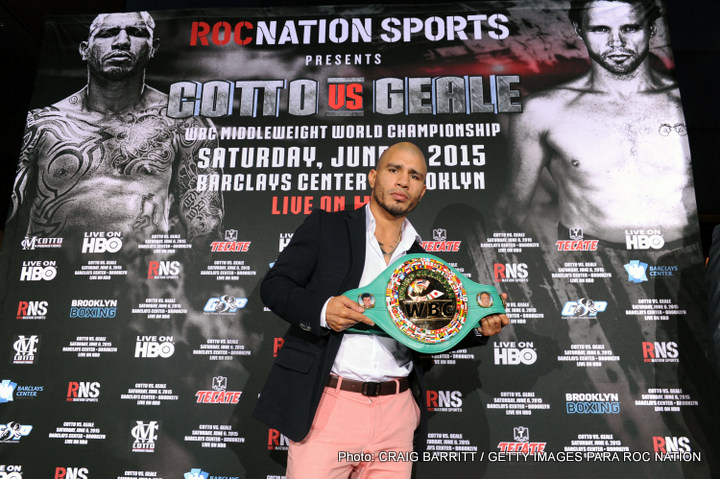 Daniel Geale (31-3, 16 KO’s) is the former IBF and WBA middleweight world champion and the current holder of the PABA and WBO Interim Asia Pacific middleweight titles. A boxing hero in his native Australia and hailed as Tasmania’s 2012 Athlete of the Year, Geale is Ring Magazine’s fourth rated middleweight in the world and the WBC’s number six rated contender. As an amateur, he competed for Australia in the 2000 Olympic Games and was a gold medalist at the 2002 Commonwealth Games in Manchester, England. Geale made his professional debut in Australia in 2004, eventually compiling twenty-one consecutive victories and winning the IBO middleweight title in 2007 against previously undefeated Daniel Dawson (29-0, 20 KO’s). In May 2009, Geale suffered his first defeat, losing his title to Anthony Mundine (35-3, 23 KO’s) in a hotly-contested battle. The Australian rebounded in May 2011 to win the IBF middleweight title with a split decision victory over Sebastian Sylvester (34-3, 16 KO’s) in Germany. After two successful title defenses, including a unanimous-decision victory over Ghanaian Osumanu Adama (20-2, 15 KO’s), Geale stunned Germany’s Felix Sturm (37-2-2, 16 KO’s) to win the WBA middleweight title, unifying the titles in 2012. A year later on August 17, 2013, Geale lost his IBF middleweight title to Darren Barker (25-1, 16 KO’s) via a split-decision in Atlantic City. He bounced back six months later with a sixth round technical knockout victory over Garth Wood (12-3-1, 8 KO’s). On July 26, 2014, in an event televised by HBO World Championship Boxing, Geale faced off against undefeated WBA Middleweight World Champion Gennady Golovkin (29-0, 26 KO’) in New York City, but came up short in trying to reclaim his former title. In his most recent fight, Geale captured the vacant PABA and WBO Interim Asia Pacific middleweight titles, winning a twelve-round unanimous decision victory over fellow Australian Jarrod Fletcher (18-2, 10 KO’s).

On Thursday, April 16, Roc Nation Sports and Miguel Cotto Promotions hosted a press conference at The 40/40 Club in Manhattan to announce the next highly anticipated battle for Miguel Cotto (39-4, 32 KO’s), the reigning WBC Middleweight and Ring Magazine World Champion and the first native of Puerto Rico to become world champion in four different weight classes. On June 6, 2015, Cotto will defend his titles against former Two-Time World Champion Daniel Geale (31-3, 16 KO’s) of Australia in a fight that will be televised live on HBO from Barclays Center in Brooklyn.

Here’s what the participants had to say…

Miguel Cotto: “All I have to say is I’ve been here for the past two days and I’m eager to get back to Los Angeles and get into another training session and get back to New York on June 6. All I have to worry about is my mindset during the fight. I know Daniel is a great fighter and I’m going to do my best as always to bring a good and exciting fight to all the fans. See you all on June 6.”

Daniel Geale: “I’m as excited as you can ever imagine. This is a great moment for me. And come June 6, it’s going to be a hell of a fight and I can’t wait to walk away with the titles.”

Michael Yormark, President & Chief of Branding and Strategy of Roc Nation: “Today is a historic day for Roc Nation and our boxing division. Muhammed Ali once said ‘he who is not courageous enough to take risks will accomplish nothing in life.’ At Roc Nation, we decided to launch our boxing division in August of 2014. We knew we were taking a risk. We knew that we were entering a sport that was established with a long history in a deep-rooted culture. It took courage, but frankly Roc Nation is nothing if not courageous…we’re committed to promoting the biggest fights and the biggest fighters. Now just a few short months later, we stand here with one of the best fighters in the world, announcing a world championship bout inside the new mecca of boxing, Barclays Center, and broadcast on the standard bearer for live boxing telecasts, HBO. It took courage and risk to get here but this is a proud moment for all of us.”

Hector Soto, Miguel Cotto Promotions: “Miguel Cotto is back and he’s in his second home in New York. As everyone knows, it’s been a tradition for the past couple of years that Miguel fights on the eve of the Puerto Rican Day Parade, so it’s an honor to fight during that time again. On June 6, Miguel Cotto will defend his Middleweight WBC Championship against a tough opponent, Daniel Geale. Have no doubt, it will be a great fight at Barclays Center and everyone will enjoy the fight especially the Puerto Ricans. Miguel Cotto will be ready, will train as hard as always and be ready for the challenge Daniel Geale brings.”

Gary Shaw, Gary Shaw Productions: “If you look at Daniel’s fight against Sturm, when we went to Germany and lifted the belt and became the world champion, that’s the Daniel Geale you’re going to see on June 6. You’re going to see a great fight. Miguel Cotto is a great fighter. Daniel understands that and we have a great deal of respect for him, but on June 6 on HBO at Barclays Center, it will be a whole new night. It will be a night when Daniel Geale takes the belt back to Australia.”

Brett Yormark, CEO of Barclays Center and the Brooklyn Nets: “Boxing is a big part of what we do at Barclays Center. We’re very passionate about it and very deeply committed. This will be our 13th big night of Brooklyn Boxing in just two and a half years and I am proud to say that Barclays Center is the new mecca of boxing in this country. Miguel Cotto has a storied history in New York, so we are delighted that he is calling Barclays Center his new home in this city.”

Cotto vs. Geale, a 12-round fight for Cotto’s WBC and Ring Magazine Middleweight World Championships, takes place Saturday, June 6 at Barclays Center in Brooklyn and will be televised live on HBO. The fight is presented by Roc Nation Sports and Miguel Cotto Promotions in association Gary Shaw Productions and is sponsored by Cerveza Tecate.