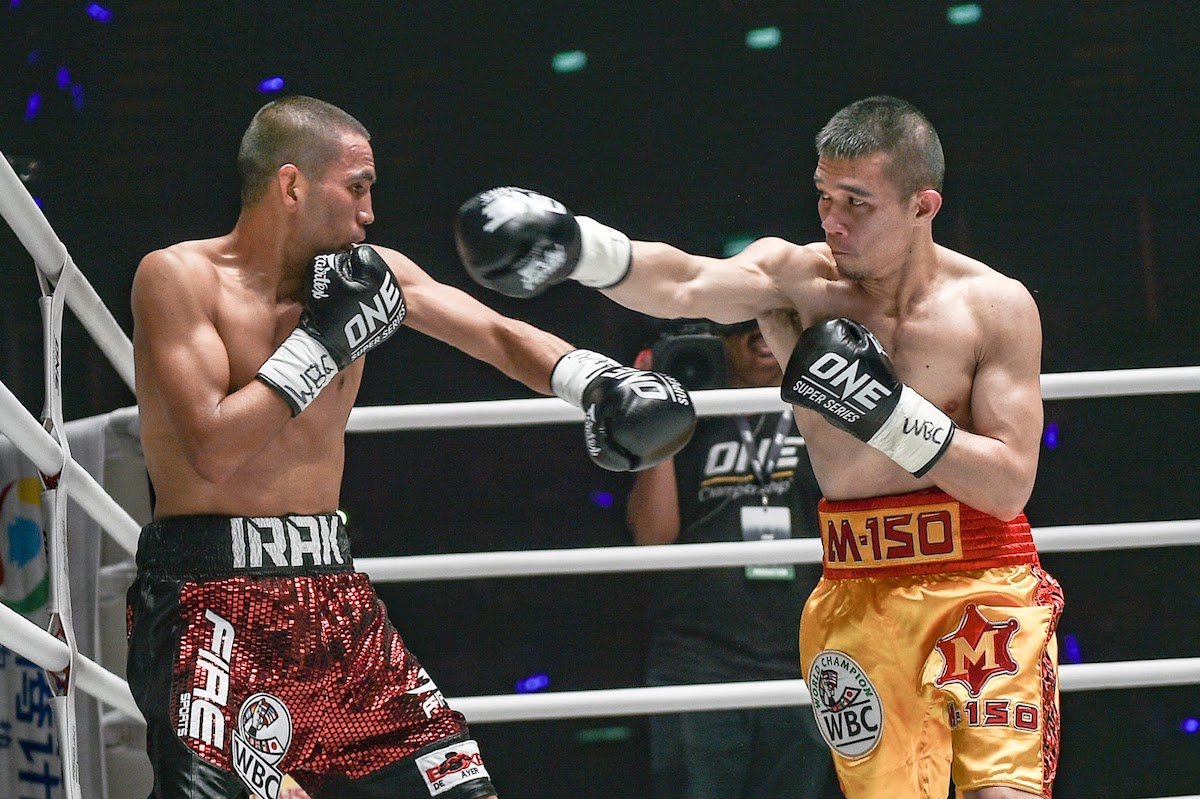 The largest global sports media property in Asian history, ONE Championship™ (ONE), hosted the biggest martial arts spectacle in the history of Thailand as the best and the brightest from boxing, mixed martial arts, Muay Thai and kickboxing gathered under one banner to celebrate Asia’s greatest cultural treasure. ONE: KINGDOM OF HEROES left an indelible legacy with 14 heart-pumping martial arts contests, punctuated by ONE Championship’s first-ever world-class boxing match that pitted two of the best super flyweight boxers in the world today. In the main event, Srisaket Sor Rungvisai of Thailand dominated Mexico’s Iran Diaz over the course of 12 rounds to retain the WBC Super Flyweight World Championship. Meanwhile, hometown favorite Stamp Fairtex defeated Kai Ting Chuang of Chinese Taipei to capture the ONE Kickboxing Atomweight World Championship in front of her hometown crowd.

In the main event of ONE: KINGDOM OF HEROES, Thai boxing superstar Srisaket Sor Rungvisai sent the crowd into a rapturous chorus of cheers by clinching a unanimous decision win over Mexican challenger Iran “MagnifiKO” Diaz to retain the WBC Super Flyweight World Championship. Banking on his heavy hands and southpaw stance, Srisaket persistently hammered the taller Diaz with hard body shots from the opening bell. The consistent attack to the midsection paid dividends for Srisaket in the later rounds as Diaz dropped his defensive guard, prompting the Thai boxer to increase his offense that had his opponent reeling inside the ring. In the championship rounds, Srisaket unleashed a series of power shots, but Diaz amazingly withstood the blitz of punches from the hometown hero. In the end, the three judges unanimously awarded the victory in favor of Srisaket with the scores of 119-109, 120-108 and 119-109.

In the co-main event of the evening, Thailand’s own Stamp Fairtex turned in a debut to remember as she dethroned “Killer Bee” Kai Ting Chuang via unanimous decision to become the new ONE Kickboxing Atomweight World Champion. Beaming with confidence, Stamp used her range and movement to outstrike her counterpart throughout the fast-paced five-round contest. A flurry of strikes in the fifth round sealed the victory for Stamp, who takes home the prestigious title belt in only her first appearance on the ONE Super Series stage.

Japanese legend Shinya “Tobikan Judan” Aoki made his case for a shot at the coveted ONE Lightweight World Championship with resounding clarity, submitting New Zealand-based Malaysian sensation Ev “E.T.” Ting in a title eliminator. From the get-go, Aoki immediately looked for a takedown and managed to effortlessly execute one against Ting’s will. On the canvas, Aoki smoothly passed Ting’s guard and locked in a deep arm triangle to put the Malaysian to sleep, clinching the victory in just 57 seconds.

Muay Thai legend Nong-O Gaiyanghadao put on a striking clinic in front of his home crowd as he punished ISKA and WBC World Champion Mehdi Zatout of France to earn a unanimous decision victory over three rounds in their ONE Super Series Muay Thai showdown. Nong-O weathered a spirited opening round from Zatout to impose his will and dominate the Frenchman with powerful kicks and precise elbows. After three rounds of action, Nong-O was declared the winner before the jubilant Thai fans inside the Impact Arena.

Nigeria’s Anthony “The Assassin” Njokuani scored the biggest win of his kickboxing career, defeating Dutch kickboxing legend Andy “The Destroyer” Souwer via split decision in a ONE Super Series Kickboxing contest. Njokuani and Souwer figured in a thrilling three-round affair as the two highly-experienced strikers went toe-to-toe, exchanging impactful blows and blistering combinations. After nine minutes of action, it was Njokuani who won on two of the three judges’ scorecards, emerging victorious in his ONE Super Series debut.

Tajikistan martial arts phenom Muin Gafurov made an astounding return to the most prestigious stage of global martial arts competition with a statement victory, knocking out top contender Leandro “Brodinho” Issa of Brazil in the first round. Gafurov turned the lights out on Issa with a thunderous right hand to keep his remarkable 100-percent finishing rate intact. His impressive performance earned him the GoDaddy Knockout of the Night.

In a ONE Super Series Kickboxing bout, Hong Kong-based Alain “The Panther” Ngalani of Cameroon and Andre “The Giant” Meunier of Australia battled to a No-Contest (NC) ruling after an inadvertent low blow rendered Ngalani unable to continue. Merely seconds into round two, Meunier threw a knee that accidentally landed low on Ngalani, forcing a pause in the action. Moments later, it was revealed that Ngalani could no longer continue, bringing the contest to an abrupt and unfortunate end.

Three-time IFMA Champion Alaverdi Ramazanov of Russia stunned the partisan Thai crowd after edging out hometown favorite Petchmorrakot Wor. Sangprapai via unanimous decision in their ONE Super Series Muay Thai contest. From the opening bell, Ramazanov applied relentless pressure on Petchmorrakot as he outstruck and outworked the former Lumpinee Stadium World Champion with fiery combinations. Petchmorrakot effectively utilized his patented elbow strikes to fend off his opponent’s advances, but it was not enough to sway the attention of the three judges at ringside as Ramazanov emerged triumphant on their scorecards after three rounds of back-and-forth action.

Japanese grappling wizard Hayato Suzuki established his first winning streak in ONE Championship, pulling off a second-round submission victory over Robin Catalan of the Philippines. Right off the bat, Suzuki took matters to the mat and grinded out his Filipino opponent with his elite wrestling. Suzuki eventually sealed the deal in the second round as he fastened a wrenching rear naked choke to force the tap.

In a ONE Super Series Kickboxing contest, Muay Thai legend Singtongnoi Por Telakun of the Evolve Fight Team turned in a tremendous striking performance to defeat promotional newcomer Masahide Kudo of Japan. Behind pinpoint combinations and powerful kicks, Singtongnoi was confident of victory in the face of an aggressive opponent. A gruelling three round affair would end with all three judges scoring in favor of the 38-year-old former Lumpinee Stadium and WMC Muay Thai World Champion Singtongnoi.

Hometown favorite Rika “Tiny Doll” Ishige of Thailand is back in the winner’s circle, following an impressive technical knockout victory over Bozhena “Toto” Antoniyar of Myanmar in the first round. Ishige had to overcome a fierce offensive from Antoniyar to start off, but once she was able to take the action to the ground, Ishige quickly took the back. From back mount position, Ishige began to unload elbows and punches until the referee called a halt to the contest.

In a ONE Super Series Muay Thai contest, Muay Thai superstar Petchdam Kaiyanghadao of Thailand made quick work of Kenny “The Pitbull” Tse of China, putting together a devastating showcase of his piston-like left roundhouse kick for fans in attendance. After a brief feeling out period, Petchdam began to unload his strongest weapon at will, and turned the lights out on Tse after he connected on one just over a minute into the bout.

China’s Fu Chang Xin turned in an impressive grappling performance, defeating Cambodia’s Rin Saroth in just two rounds. The Kun Khmer stylist Saroth tried to make it a standup contest early, but Fu used his grappling skills and took the action to the mat where he sunk in a deep rear naked choke to finish Saroth in the second round.

Setting the tone for an action-packed evening was a flyweight encounter between Ramon “The Bicolano” Gonzales of the Philippines and Dodi “Maung” Mardian of Indonesia. Driven to claim his second-straight victory on the ONE Championship stage, Gonzales put Mardian to sleep with a rear naked choke in the first round.

The largest global sports media property in Asian history, ONE Championship™ (ONE), announced today that WBC Super Flyweight World Champion Srisaket Sor Rungvisai of Thailand and challenger Iran “MagnifiKO” Diaz of Mexico have both made the contracted weight limit at today’s official weigh-in and are expected to be ready for all the action which takes place this Saturday night. Srisaket tipped the scales officially at 52kgs (114.6lbs), while Diaz easily made weight for the first world title contest of his professional career at 52.1kgs (114.8lbs).

Srisaket Sor Rungvisai and Iran Diaz are set to square off in the main event of ONE: KINGDOM OF HEROES, set for Saturday, 6 October, at the Impact Arena in Bangkok, Thailand. The bout will be for the coveted WBC Super Flyweight World Championship. In the co-main event, ONE Super Series Kickboxing Atomweight World Champion “Killer Bee” Kai Ting Chuang of Chinese Taipei will defend her title against ONE Super Series debutant Stamp Fairtex.

“I feel very strong and I have trained very hard for this. My weight is on point and I am expecting a tremendous showing this Saturday night. I am definitely looking to finish him within the distance. This will not go to a judges’ decision. Everyone who knows me, and is a fan of mine, knows what I bring to the table. They all know how I fight. Everytime I step into the ring, my mind is always thinking knockout. This time will be no different. I’m looking to put on a show for my hometown fans!”

“This is the biggest opportunity of my career, and I have worked extremely hard in camp preparing for it. Srisaket is a great champion, and he is well-loved by his people. But I’m coming in here looking to seize the moment. This is my time to shine. I have the best team in my corner. They have helped get me ready to capture the gold. I feel so strong and ready. Making weight was no problem for me. I have one thing on my agenda, and that’s to take the belt back home to Mexico. The champion better be ready, because I’m coming at him with my best!”