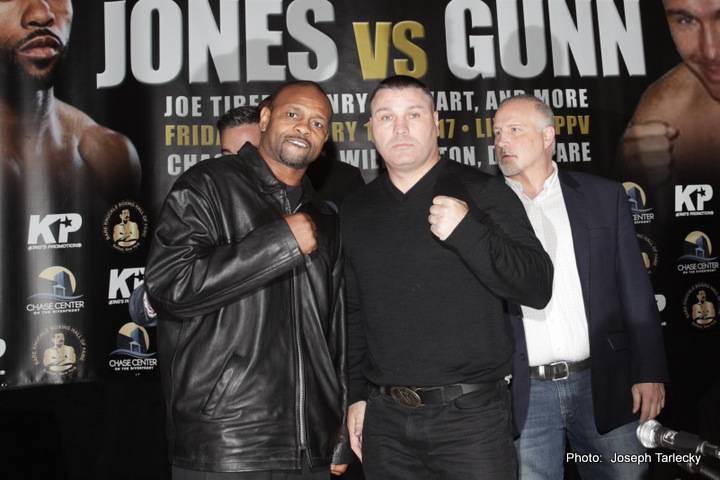 Below are quotes and the video from Tuesday’s press conference announcing the legendary Roy Jones, Jr. taking on Bobby Gunn for the WBF Cruiserweight title.

That bout will take place on February 17th at the Chase Center in Wilmington, Delaware.

“Delaware is starving for some activity.”

“I always do things that people don’t expect me to do.”

“I promised Bobby a long time ago that I would give him the opportunity, and I am a man of my word.”

“Come February 17th, I am going to shock the world again.” 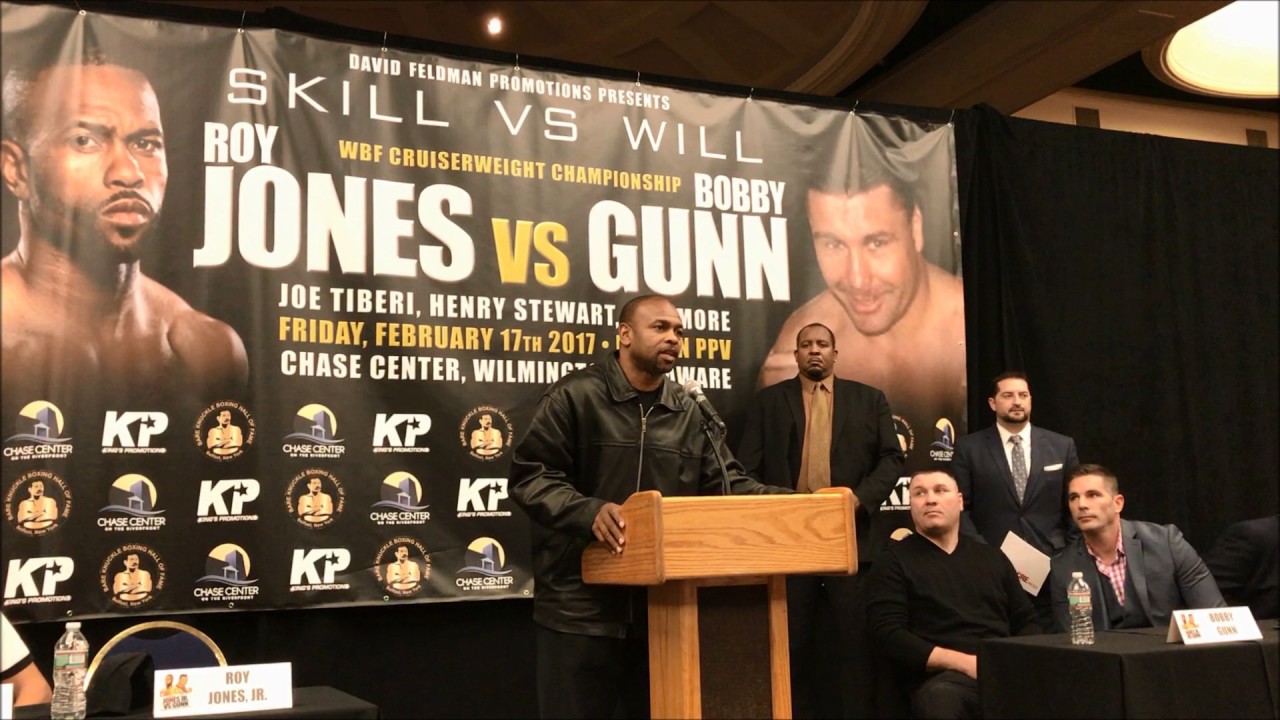 “Roy motivates me. To fight an all-time great is a huge thing for me and I believe that he is top-five all-time.”

“After February 17th, Roy will never forget me for the rest of his life.”

During his twenty-seven year professional career, Jones Jr. (64-9, 46 KOs) has secured world titles in four different weight categories – Middleweight, Super Middleweight, Light Heavyweight and Heavyweight – and is the only boxer in history to start his career as a Light Middleweight and then go on to win a Heavyweight Championship.

In winning the WBA Heavyweight title by beating John Ruiz by unanimous decision in March 2003, Jones Jr. made history by becoming the first former middleweight champion to win a heavyweight title in 106 years.

Jones Jr. said of the bout, “I know Bobby Gunn is coming to bring it. He’s a hard-nose, tough fighter that comes right at you, but I’m going to show him why I’m one of the best that ever did it and he doesn’t belong in the ring with me.”

Gunn, internationally known for being a Bare-Knuckle legend, will put the gloves back on to battle ring legend Roy Jones, Jr.

Like Jones Jr, Gunn has a fearsome record in gloved boxing – 21 wins (18 KO) 6 losses, one draw, and one no-contest – and an even more impressive undefeated Bare Knuckle record of 72-0 with 72 KO).

Gunn has been in the ring with top fighters Enzo Maccarinelli, Glen Johnson, Tomasz Adamek, and James Toney, so he is no stranger to sharing the ring with boxing’s elite. Gunn said of his upcoming clash with Jones Jr, “It’s an honor to share the ring with a legend like Roy Jones. I’ve been chasing him for a few years now, and on February 17, I will catch him.”

World Boxing Foundation’s North American Vice President James Gibbs said of the upcoming championship bout, “Roy Jones, Jr is a living legend and we are honored to have him fighting for our Cruiserweight Title against a warrior like Bobby Gunn. We are looking forward to this bout.”

The undercard for this championship match will feature popular Delawarean Joe Tiberi (13-2, 6KO), Canada’s Henry Stewart (1-0, 1KO), as well as more to be announced.

Roy Jones, Jr. vs Bobby Gunn, for the WBF World Cruiserweight Championship, on Friday, February 17, 2017 and will be aired live on PPV.

It’s been nearly five years in the making, but former pound for pound king of gloved boxing Roy Jones Jr. (64-9, 46 KO) will step inside the squared circle to throw hands with pound for pound bare knuckle boxing king and former cruiserweight champion of the world Bobby Gunn (21-6-1, 18 KO).

The two champions were set to do battle back in 2012, though the fight fell through, but Gunn never lost his sight on this superfight with Jones.

“Roy is one of the most recognizable names in boxing, and has accomplished what every boxer dreams of,” said Gunn. “I am honored to finally have this fight happen, and can promise fans they will see fireworks.”

Neither Gunn nor Jones have nothing left to prove in their careers as they have already solidified their legacies in the fight game, but this 12-round war is about pride, and undoubtedly both decorated pugilists will leave it all in the ring in an epic throw down.

Jones told ESPN, “I know Bobby Gunn is coming to bring it. He’s a hard-nose, tough fighter that comes right at you, but I’m going to show him why I’m one of the best that ever did it and he doesn’t belong in the ring with me.”

While Gunn made his mark in the cruiserweight division in gloved boxing, he has continued to be a worldwide sensation in bare knuckle boxing, going 73-0 with 73 KO. He has recently been featured in Mens Journal, Showtime Sports and Rolling Stone Magazine, and is only the second active BKB world champion to go to battle between the ropes with gloves one, joining the likeness of John L. Sullivan.

This highly anticipated fan friendly bout is to take place February 17 in Delaware, and Gunn is excited for to throw hands with the fighter once regarded as pound for pound the best fighter in boxing.

“I’ve fought world champions and future hall of famers, and am going into this fight to get my hand raised,” said Gunn. “I’ve been actively training in anticipation of this fight getting signed, so now it’s time to take training camp to the next level and put the work in to get the W.”

For this fight Gunn will be making Belfast, NY, home of the Bare Knuckle Boxing Hall of Fame, home for his training camp, under the watchful eye of Gunn’s renowned trainer Dominic Scibetta and BKB historian and BKBHOF President Scott Burt, who has a special training regime lined up in preparation for this historic showdown.

With the recent decline in exciting fights throughout the boxing world, this is what fans need; this bout has all implications to be the next Gatti/Ward due to the aggressive and unrelenting styles of these two champions.

Leading up to the main event, the undercard will feature exciting fighters looking to make their mark, including Bobby Gunn Jr., Henry Stewart, Chris Cella, and several others to add to this action packed fight card.