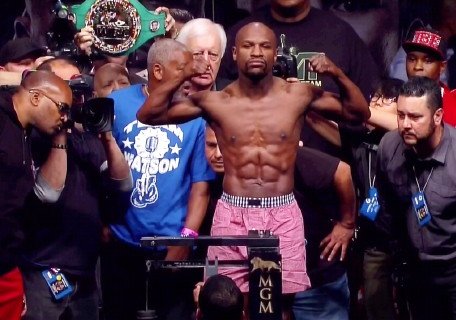 Trainer Floyd Mayweather Sr says his son Floyd Jr’s mind is in a better place for the second fight with Marcos Maidana (35-4, 31 Kos) than it was the first time they fought last May at the MGM Grand in Las Vegas, Nevada.

Mayweather Jr had hand problems going into that fight, and he and his fiancé Shantel Jackson had just recently broken up at the time. It was a lot of things happening at around the same time that Mayweather fought Maidana that could have negatively impacted his performance in the ring in that fight.

It’s going to be awfully difficult for Maidana to get anything going in this fight on September 13th if Mayweather comes out and fights at the top of his game like he did in his fights against Robert Guerrero and Saul “Canelo’ Alvarez last year.

Both of those Mexican warriors were out of their element against Mayweather because he never gave them a chance to get started. Maidana and his trainer Robert Garcia seem to think that they had the best version of Mayweather in the ring that night last May, but that might not be true.

If we see a much more improved Maywather this time, then you have to conclude that he was limited last time he fought Maidana due to things going on with his life and perhaps hand problems. Maidana only appeared to win 3 rounds, so even with Mayweather not at his best, Maidana still didn’t have enough talent to beat him.

Mayweather is going to need to be at his best because Maidana is going to be looking to throw over 100 punches per round, and with that many shots being thrown, Mayweather could have problems if he stands still for very long.