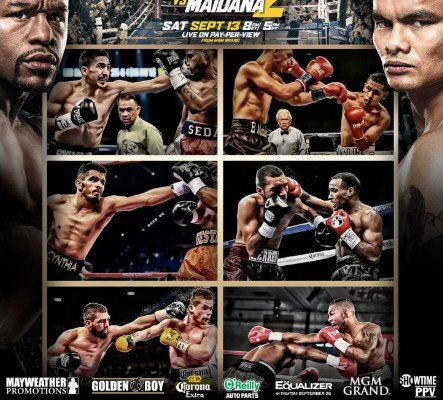 In an effort to avoid any problems with his gloves getting approved by WBA/WBC welterweight champion Floyd Mayweather Jr (46-0, 26 KOs) in their rematch on September 13th, Maidana plans on wearing the same gloves – Everlast Powerlock – that he used in his first fight against Mayweather last May when Maidana lost a 12 round majority decision at the MGM Grand in Las Vegas, Nevada.

Last May, Maidana attempted to use Everlast MX gloves, which Mayweather said no to because he felt there was too little padding around the knuckle area of the gloves. The gloves were also inspected by the Nevada State Athletic Commission as well as Mayweather Promotions CEO Leonard Ellerbe, and the gloves weren’t used for the fight.

“It’s going to be the Powerlock,” Maidana’s trainer Robert Garcia said to esnewsporting.com.
There was resistance on Team Maidana’s part over the glove issue last May after Mayweather objected to the Everlast MX gloves, but they quickly gave in and selected the Powerlast gloves to replace them.

Mayweather is the A-side in this fight, so Maidana is going to need to be prepared in case Mayweather objects to the Powerlast gloves as well, because Mayweather is calling the shots in this fight. If he feels that there’s something he doesn’t like about Maidana’s gloves, then it’s quite possible that Maidana will need to exchange them for a different pair.

With the way that Mayweather is likely going to be fighting Maidana on September 13th, it probably won’t matter what gloves Maidana wears in the fight. Mayweather is going to be looking to make Maidana miss with his shots all night and not give him any opportunities to land.