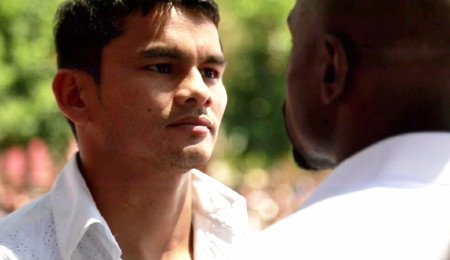 WBA/WBC welterweight champion Floyd Mayweather Jr (46-0, 26 KOs) has some tricks that he plans on unveiling on Marcos Maidana (35-4, 31 KOs) in their rematch next month, says Mayweather’s training assistant Nate Jones. He’s not saying what those tricks are, but he believes that Maidana won’t be expecting them.

Unless is good at adapting, which he probably isn’t, he’s going to have some problems when he gets in the ring against Mayweather on September 13th at the MGM Grand in Las Vegas, Nevada.

“We working on some things in here brother that he [Maidana] ain’t going to be ready for.” Jones said via the >Boxingsocialist.com. “He thinks Floyd fight the same way all the time. Okay, just wait Floyd’s going to show him another gear that he hasn’t seen. Man, he [Mayweather] ain’t looked this [good] since about four years ago.”

It’s unknown what this new strategy is for Mayweather to use against Maidana, but if it’s something to do with Mayweather moving a lot more, then that’s going to be a winning strategy because that’s how you beat Maidana. You can’t stand in front of him because he needs a stationary target for him to win.

If Mayweather is looking that good then Maidana doesn’t stand much of a chance in this fight. 4 years ago, Mayweather was fighting at a very high level and looking outstanding. 5 years ago, Mayweather totally schooled Juan Manuel Marquez in beating him by a lopsided 12 round unanimous decision. Marquez didn’t have the pressure style of fighting that Maidana did, and he didn’t weight 165 pounds like Maidana did when he fought Mayweather last May.

Mayweather is reportedly sparring with 160 pound sparring partners because he expects Maidana to come into the fight over 160 like last time. Much of the reason for Maidana’s success against Mayweather and Adrien Broner was due to Maidana’s weight advantage against them. If you put Maidana in with a guy that weighs 180 pounds when he fights like Carl Froch or Andre Ward, he’s going to struggle badly. Maidana’s weight advantage along with his power and heavy pressure style of fighting is what gave Mayweather problems.