All-time great, indeed living legend Roberto Duran fought until the age of 50, his career full of amazing comebacks, of title wins at multiple weights. But fighting on past the age of 40 is not for every fighter. Far from it. Only a special few are able to carry on competing at elite level when aged 40 or more. And “Hands of Stone” doesn’t think Gennady Golovkin will be one of them.

Speaking with Fight Hub TV shortly after Golovkin’s wide (it should have been way wider on the cards of the judges) decision loss to Canelo Alvarez, Duran said he thinks GGG should call it a career and retire. Duran didn’t like what he saw inside the T-Mobile Arena in Las Vegas on Saturday night. 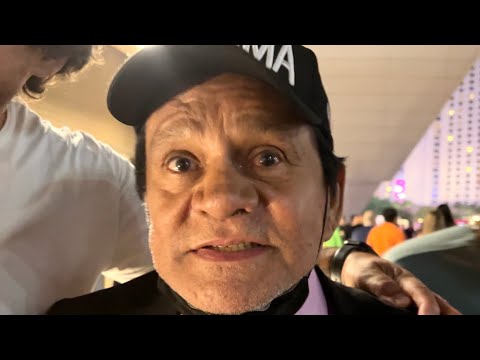 “I thought Canelo was going to apply more pressure to knock him out,” Duran said of the trilogy fight. “[Golovkin] didn’t apply a lot of pressure. Retire now. He lost against Canelo. Golovkin is not the same as before. I saw him weak and lazy. I saw him washed [up]. His mind didn’t help him. He didn’t think well in the fight. In boxing, you have to think a lot.”

It seems unlikely GGG will be able to reinvent him the way Duran did so many times. Was it not only Golovkin’s lack of speed and his faded reflexes that were working against him on Saturday, or was it, as Duran says, his lack of sheer mental desire also? GGG still has a rock for a chin, never having been knocked down in his career let alone stopped, and he could likely carry on and beat some good fighters. But it would be sad to see Triple-G carry on and lose to guys who would never have lived with him just a few years ago.

Golovkin, 42-2-1(37) said after the Canelo loss that he will fight on, stating how he still has belts at middleweight. And for a reigning world champion, it is hard to call it a career. Some experts hope to see GGG back in the ring, while others are of the opinion that he has nothing at all left to prove and he should now retire. Duran held nothing back in giving his opinion on what Golovkin should do.

Do YOU agree with Duran – should Golovkin retire?