Canelo ended up winning by a 12 round unanimous decision in a fight that was scored closely by two of the judges at 115-113 x 2.

Many boxing fans on social media scored it 117-111 and 116-112 for Canelo, as they didn’t feel that Golovkin did enough to win five rounds.

Valdez believes Golovkin (42-2-1, 37 KOs) focused on trying to “survive” after he realized he couldn’t win in the first two rounds against the younger and faster undisputed super middleweight champion Canelo (58-2-2, 39 KOs) in their headliner at the T-Mobile Arena in Las Vegas.

Golovkin took an odd approach of trying to win the fight by choosing to stay on the outside, throwing jabs and very few power shots.

It appeared that Golovkin replicated the same game plan he had in the second fight, but in this case, he threw few power shots. Golovkin’s decision to throw mostly jabs could have been due to his loss of hand speed.

The 40-year-old Golovkin was too slow for him to throw a lot of power shots because Canelo would have countered him repeatedly had he done so.

“I think he’s satisfied because only he knows what he’s been through,” said Oscar Valdez to K.O. Artist Sports when asked if Canelo is satisfied with his performance against Golovkin despite not getting the knockout that he’d hoped.

“All the criticism of the first and second fight, obviously he wanted to win this fight. He [Canelo] wanted to knock him out. He did his part. He looked for the knockout.

“I think Gennadiy Golovkin was trying to survive after the first two rounds when he saw that he was getting dominated. He just didn’t try,” said Valdez.

Golovkin tried the best he could given his advanced age, but it wasn’t going to be good enough to beat the superstar Canelo.

Obviously, it would have been wiser for Golovkin to scrap his original game plan after the first four rounds because it was clearly not working. But instead, Golovkin stubbornly stuck with the game plan, and wound up losing virtually all of the first seven rounds.

We don’t know whether Golovkin’s trainer Johnathon Banks was slow in changing game plans during the fight.

If Banks was the one that was lagging in changing tactics, that would help explain why Golovkin waited until the eighth round to begin coming forward to throw power shots against Canelo.

Golovkin’s loss of hand speed in the last four years was always going to make it tough for him to beat Canelo because he was too slow. That’s not to say that Golovkin couldn’t have won, but it would have required for him to be much more aggressive than he showed.

Canelo should fight Benavidez or Bivol

“Either one [Dmitry Bivol rematch or David Benavidez fight],” Valdz said when asked who Canelo should fight next. “Canelo, whoever he fights, is going to be a sold-out event.

“People are going to watch. Benavidez is a great fighter. Charlo, Bivol, all those names are great for Canelo. It’s all up to him for whoever he wants to fight next.

“[Gilberto] Zurdo Ramirez is a great fighter. I feel that he’s very underrated,” said Valdez when asked about his thoughts on the Dmitry Bivol vs. Gilberto ‘Zurdo’ Ramirez fight on November 5th in Abu Dhabi.

“Not a lot of people recognize his talent. He’s one of those fighters that can beat Bivol because of his style, and that’s his natural weight. I truly believe Zurdo Ramirez has a big shot of winning that fight,” said Valdez. 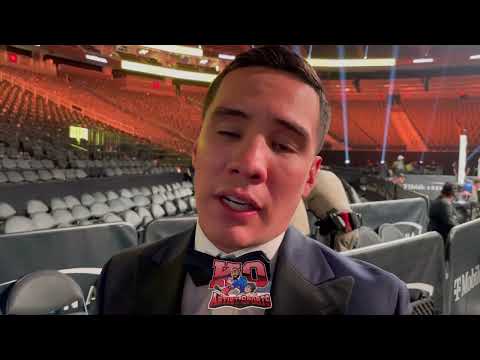