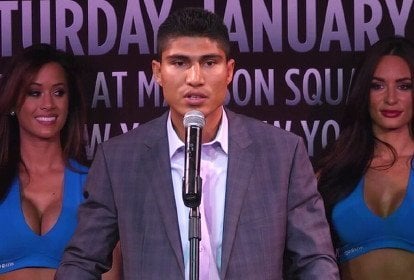 Much has been said of late about the plans laid out by Top Rank C.E.O. Bob Arum for Mikey Garcia’s in 2014. All signs point to Yuriorkis Gamboa as the next opponent for Mikey on May 17 according to widely reported stories from Bob Arum and just today 50 cent was on twitter saying it’s basically a done deal.

With Gamboa’s recognizable name in and around the featherweight and lightweight divisions it makes a lot sense.

It doesn’t hurt that the two fighters have been going toe to toe for a while now on twitter which will only help the hype in the lead up for this much talked about matchup.

Another interesting element is that Gamboa can match Garcia in skill and will certainly have the speed advantage come fight night.

A win by either guy will raise their profile something that’s difficult to gain at the smaller weights let alone the 130 or 135 pound divisions that have been for the most part drained of a viable named opponent in the last few years.

Gamboa’s career has been on hold for a variety of reasons one being a big fight that never came to fruition with than unbeaten Juanma Lopez who was knocked out by Orlando Salido.

Gamboa claimed promoter issues when he signed a contract with Top Rank causing him to lose out on yet another highly anticipated fight this time with Brandon Rios.

Time and issues outside of the ring have plagued the “Guantanamo Cyclone” so a fight with Garcia is just what the doctor ordered to help resuscitate his career.

Obviously I write this article speculating on the future plans for Mikey Garcia so for theory sake let’s assume he gets by a very difficult task in Yuriorkis Gamboa.

Instead of jumping right to 135 after a Gamboa victory, that’s if 130 was the weight agreed upon, it may be worth it for everyone involved to pony up a nice offer for one of the Japanese belt holders in an attempt to unify the belts at 130.

Sure it may be a long shot for the same reason why Canelo or some other big names in America wouldn’t want to go to Japan but it adds another option to gain momentum furthering his career.

I bring up the Japanese fighters to preach patience to Top Rank and even his brother/trainer Robert Garcia.

The message I would send to the powers that be is it’s not Mikey’s fault that Manny Pacquiao’s options are limited for the foreseeable future at the company.

Don’t get me wrong there is an argument that can be made that they’ve already moved Garcia cautiously enough before 2013 and with over 30 fights the time is now.

I don’t disagree with that thought and we already have enough champions in today’s game that get spoon fed stiffs or favorable stylist matchmaking.

However, fighting solid and top level competition doesn’t have to mean being thrown in the ring with an elite fighter a few weight classes above him by the end of 2014.

Nope if I were in charge I would build Mikey much slower before he faced Pacquiao. In the mean time here are a few names he could keep him busy, develop his skills, and raise his profile enough to make a Pacquiao fight realistic.

Using the word “build” may come off as a turtle’s pace milking HBO and the fans for everything their worth. That’s not what I mean and I’m very happy at the progress that has been made on the milking issue that has been a thorn in the sports side since the early days.

Let’s figure Manny will fight twice a year maximum for the next what 2-3 years tops. At that rate Mikey could fight at least 3 times a year with a possibility of 4 if he scores an early KO.
It’s not a perfect world I realize that but Mikey could at the very least fight 3 or 4 more times before squaring off with Manny.

Maybe the Gamboa fight gets made at 135 than Garcia wouldn’t have to move up in weight to face the winner of Ricky Burns versus Terrance Crawford later this year.

My guess like many is Crawford wins his fight with Burns. Burns has a very strong and loyal fanbase in the U.K. a fact that makes a fight with him bigger worldwide.

A Crawford win over Burns would grow his name overseas giving him even more credibility as a fighter and an opponent for Garcia’s resume.

HBO has already invested time and money into Crawford it would seem like a sure fire legit fight that fans and HBO could get behind.

Another tough style matchup for Mikey and if he were to pass the Crawford/Burns test he still could find a name like John Molina who has that face first offensive pressure perfect style wise for Mikey’s skill set.

Once again assuming Garcia graduates from 135 with no major hiccups 140 is has plenty of options at Top Rank to keep Garcia busy at the same time facing well known established fighters.

Names like Mike Alvarado, Brandon Rios, and Ruslan Provonikov all whom sport very entertaining styles.
In a year or so a prospect at 140 could rise along with the contender and recent Top Rank signee Karem Mayfield could be thrown into the pot as well.

Nowadays some fighters have been able to rise in weight and still dominate but few have been able to do what Manny Pacquiao did in such a short period of time.
I don’t doubt that Mikey Garcia is a top ten pound for pound fighter with elite level skills matched with serious power in both hands. At this stage there is no point to put Mikey in the express lane for a fight with Manny Pacquiao.
I fully understand that Arum and the brass at Top Rank are looking to replace Pacquiao as soon as possible. Both Manny Pacquiao and Floyd Mayweather beat the uber popular Oscar De La Hoya in front of a mainstream PPV audience thus becoming PPV stars.
Their attempt to pull the wool over fans eye’s in thinking Mikey Garcia by the end of the year could beat Manny Pacquiao after one fight at 135 totally skipping over 140 into a welterweight fight against a guy with Manny’s speed and power could backfire.
I assume that Mikey being dropped and buckled in his last two fights against men not known for power doesn’t fall on deaf ears or in this case maybe blind eyes to the people at Top Rank.
In rushing Garcia for Pacman Top Rank may damage their fighter in more ways than one. Then again the fact that it’s being debated has at least put a bug in the boxing public’s ear raising Mikey Garcia’s profile up a notch.
Maybe this is all talk and Top Rank has no intentions on making this fight for at least another year or two down the line. By that time Manny will be even more ready for the taking and Garcia will have developed as a fighter and build a solid resume.
Written by Chris Carlson Owner and Host of Rope A Dope Radio at www.blogtalkradio.com/ropeadoperadio
Follow Chris on Twitter @RopeADopeRadio & http://ropeadoperadio.wordpress.com/