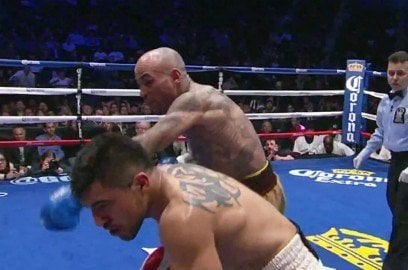 Eighteen months off for Victor Ortiz resulted in just below six minutes in the ring as he was shocked by a right hook from Luis Collazo. Tonight was all about Victor Ortiz who for awhile was being pushed along by Golden Boy Promotions as the next possible star and after a bumpy road this may be the final set back. Ortiz in the prefight hype claimed he never really left the gym despite having a badly broken jaw and that his physique should show it. Well Ortiz looked to be in great shape but he came out tight in the first round and was wide with his shots. He won the first round and was aggressive. His lead hand work was pretty good as his jab and right hook appeared to be on point. Luis Collazo fought a relaxed and intelligent fight looking to set up the left hand in the first round. The second round became interesting as both men traded left hands early in the round.

Collazo began to distance himself as the second round progressed. He scored on a solid left uppercut that was followed by a clean left hand down the middle. Ortiz continued to attack but was just a little open and predictable coming in straight ahead. Then Ortiz loaded wide and was caught by a shorter and crisper right hook by Collazo and was turned around. Collazo wasted no time dropping in a left hand and Ortiz was down on all fours in his corner. Ortiz never even moved and remained down on the canvas as Benji Estevez reached the count of ten and the fight was quickly over. Initially Ortiz was supposed to fight Alfonso Gomez and that fight was scrapped by a hand injury to Gomez. This fight on paper was definitely more risky and Collazo proved what kind of a fighter he is. After the fight Collazo added on to his big victory calling out Floyd Mayweather to come to New York City to take on the challenge. While it is doubtful that Mayweather would fight him as the Amir Khan fight looks guaranteed at this point Collazo was in the zone tonight. Hopefully Collazo is rewarded with a big follow up. Perhaps a Marcos Maidana fight is in the near future as tonight’s bout was for the WBA International Title.

As for Victor Ortiz boxing may not be his life anymore. He has lost three fights in a row by stoppage and has the long layoff on top of all that. Ortiz was on reality television and will be in Sylvester Stallone’s Expendables Part Three so he has an avenue that is not boxing. He claimed to have worked hard for the fight and was very enthusiastic about his camp and his team but tonight he was just shocked by a hard punch and paid the price. Maybe he bit off more than he could chew or maybe he just does not have it anymore. If there is any good to be taken away tonight it is that he did have a good opening round and if he does want to continue fighting he should get in the ring quick and with a soft touch. The former rising star just could use a victory to bring in some confidence and restore some faith in himself. The future is once again unsure for Victor Ortiz and it is once again another setback in a rollercoaster ride that has been his boxing career. Like a welterweight Andrew Golata, we don’t know what we are going to get but we get is memorable to say the least.

In the opening bout of the broadcast American featherweight prospect Gary Russell Jr notched his fourteenth knockout but that was expected. Why in this stage of his career is Russell still fighting guys with half as many losses as wins? Now records do not mean everything but this opponent, Miguel Tamayo, was completely overmatched and it was easy to see early on. Now developing a fighter is a fine line as it’s a balancing act between bringing a guy up too fast and suffering a major setback or having a guy come along too slow and not developing properly. Not trying to say Russell needs to be fighting for a title but he needs to be fighting guys who are world class and who can give him a competitive and difficult fight. He has been in the professional ranks for five years, has he even been tested yet? Russell has the gifts of hand speed, timing, and he can counter punch as well as punch in combination. What he needs to do is display it in the ring with a guy who is not on the same level as his sparring partners.

Yildrim's Manager Ahmet Oner Hyping Canelo Shot, Says Yildrim Is “A Golovkin-Style” Fighter
No doubt Mr. Russell has a solid right hook that he throws very well while his opponent is mid punch and that’s where he can do damage. Russell also intelligently attacks the body well with both hands and did score a tremendous knockout. So at least he is not fighting down to the level of these lesser fighters but he needs to make a move and step it up or he may develop poor habits and stagnate like a fighter who does not challenge themselves does. In the end he fought a solid performance and shows great promise; let’s just hope he does it against a true threat in the near future.

Also on the card Eddie Gomez took a lopsided decision in a battle of the unbeatens over Jaquan Arnett. The fight was fought in a pace of lulls and spurts that favored the compact punching Gomez and kept Arnett playing the posing and waiting game. Arnett to his credit survived a seventh round body shot knockdown and a viscous assault by Gomez. In a great moment of bravery, Arnett finished the final minute of round eight rolling his shoulder and firing several solid right hands down the center that landed cleanly. Gomez displayed good attributes such as effective body punching, mixing his shots to the head and the body, moving well after his punches to create angles, and was very explosive. A great combination from Gomez was his overhand right to the head followed by a left hook to the body. This combination resulted in the knockdown and right before that series he landed an overhand right and smartly dodged out to the side. Gomez was hardly out of position and in danger and Arnett seemed unable to get off. Arnett waited for the big opportunity to arrive and Gomez just made it happen. Victory was achieved for the bold in this fight. Arnett can bounce back but he will need to focus on his movement, his jab, and setting up his offense. Gomez can move on to bigger and better fights.