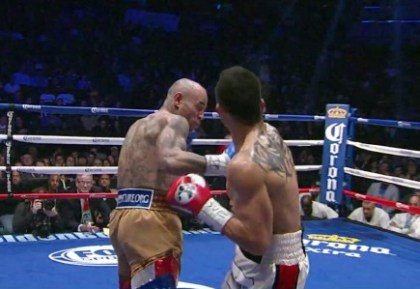 “I had no doubt in my mind that I was going to win,” said Collazo. “I went through hard times and maybe I wasn’t ready before, but I was ready today.

“When I was in the locker room, the joy, happiness and excitement hit me that I have the opportunity to perform in Brooklyn in front of my fans and the people I grew up with here,” he continued.

“I knew Ortiz was going to come out and be aggressive and I had to stay focused and stick to the game plan. People say that I can’t punch, but I guess they’re wrong.”

Ortiz, who was away from the ring for 19 months, looked well conditioned and ready when the fight began. However, Collazo stuck to his game plan and wasn’t fazed by Ortiz’s aggressive start to the bout. With a right hook to the chin, Collazo sent Ortiz to the canvas and a flurry of punches that followed ended the fight in 2:59 of the second round.

In the co-main event undefeated prospect Eddie “E-Boy” Gomez (16-0, 10 KO’s) defeated previously unbeaten Daquan “King” Arnett (11-1, 7 KO’s) of Orlando, FL in a hard-fought 10-round super welterweight bout. Gomez, who with this win puts himself in a position for a world title shot, was elated when he heard his name called as the fighter with his undefeated record intact.

“I just took my time in there and did what I had to do,” said Gomez. “Now I’m just happy.”

Gomez continued, “I should have gone to the body earlier and I think I could have gotten him in four or five rounds. I’m just thankful for the opportunity to get this fight. I took full advantage and worked hard.”

Arnett, was gracious in defeat and enthusiastic about the road ahead despite his first loss.

“This is the beginning for me not the end,” said Arnett. “I am going to come back stronger and will take this and learn from it.”

Undefeated Gary Russell Jr. (24-0, 11 KO’s) of Capitol Heights, MD kicked off the FOX Sports 1/FOX Deportes telecast with a bang in the form of a fourth-round knockout of Obregon, Mexico’s Miguel Tamayo (14-8-2, 12 KO’s). Despite a slow start in the opening round, Russell Jr. turned up the energy and showcased his skills, sending Tamayo to the canvas in the fourth round, rendering him unable to get up from the canvas.
READ:
Jarrell Miller's Promotional Deal With Top Rank A Done Deal, But Big Baby Won't Be Fighting On The Wilder/Fury Card

“I felt good in the ring tonight,” said Russell Jr. “I paced myself and worked towards what I wanted. I felt prepared. I went through six weeks of training and I rose to the occasion.

Russell Jr. continued, “I am looking toward the future and getting a shot at a world title.”

In non-televised undercard action, some of New York’s most exciting young prospects showcased their skills with impressive wins.

Barclays Center regular “Sir” Marcus Browne (9-0, 7 KO’s) of Staten Island made the most of his seventh appearance at the arena as he went the distance against Shreveport, LA’s Kentrell Claiborne (4-9, 3 KO’s) in a six-round cruiserweight bout. The 2012 U.S. Olympian was happy that his opponent had a “head made of stone” so that he could get more experience in the ring.

“I got some good rounds in,” said Browne. “I’m learning how to be a distance fighter and to prove I could keep my composure.”

Local Bronx up and comer Emmanuel “Manny” Gonzalez (14-0, 7 KO’s) went the distance against Victor Sanchez of Houston, TX (5-8-2, 2 KO’s) in an eight-round featherweight matchup that saw Gonzalez winning nearly ever round on all three judges’ scorecards despite a point deduction for holding in the seventh round. Gonzalez also looked at his eight-round bout as a learning experience.

“This is the first eight-rounder that I’ve fought [that has gone the distance] in about a year and a half,” said Gonzalez. “I definitely got a little winded, but I will work even harder next time and continue to be undefeated.”

In the first fight of the evening, Rafael Vasquez of Brooklyn, NY (10-1, 8 KO’s) scored a first-round technical knockout over Bradley Patraw (10-7, 5 KO’s) of St. Paul, Minn. in featherweight action that was scheduled for eight rounds.

Ortiz vs. Collazo was presented by Golden Boy Promotions and sponsored by Corona and Casamigos Tequila.