Golden Boy Promotions matchmaker Roberto Diaz has revealed that WBC lightweight champion Devin Haney is having problems making the 135-lb limit for his fight this Saturday night against Joseph ‘Jojo’ Diaz Jr. at the MGM Grand Garden in Las Vegas.

If Haney fails to make weight today at the weigh-in, it would be a sure disaster for him and Matchroom Boxing, as he would lose his WBC 135-lb title and would be out of the running for a big-money stadium fight against undisputed lightweight champion George Kambosos Jr. in the first quarter of 2022 in Australia.

The only bargaining chip Haney has in getting the fight with Kambosos is his WBC title, and if he loses that, he’ll be back to square one, having to scratch & claw his way into position to challenge for a world title against other contenders like Vasily Lomachenko, Ryan Garcia and Michel Rivera.

If Haney does make weight today, he could be weight-drained and too depleted to turn back the threat from an energized Jojo Diaz, who is strong at the weight due to him coming up from 130 not long ago.

We just saw a weight drained Teofimo Lopez lose his four titles after struggling to make the 135-lb limit for his fight last weekend against Kamboso. Could this happen to Haney on Saturday?

With the way that Haney has been bulked up wearing heavy coats this week to try and sweat off the pounds, it’s clear that he’s having A LOT of problems getting down to the 135-lb limit.

During the pressure conference, Haney looked gigantic compared to Jojo Diaz, and it is evident that he still needed to take off a lot of weight to get down to the 135-lb limit.

“Devin is a big 135, struggling to make weight; he’s ready to move to 140. Is it one fight too long at 135. We saw it with Teofimo, and we may see it again on Saturday,” said Golden Boy matchmaker Roberto Diaz to Fighthype on Haney having problems making the 135-lb limit.

“Absolutely,” said Diaz when asked if Jojo Diaz would be willing to go to Australia to face undisputed lightweight champion George Kambosos Jr. next if Joseph beats Haney on Saturday.

“First things first, Saturday night is a big fight for him, and it’s a significant fight for Golden Boy. But Kambosos should have that opportunity to fight in Australia.

“First things first on Saturday night, but afterward, we’ll sit down with Team Diaz, and if that’s the fight that makes more sense, Australia, he’s shown by going to Gary’s backyard. Jojo is a dog, and that’s what people have to remember.

“Jojo is a dog. He’s willing to fight anybody. He’s a throwback from the fighters in the past. He wants a legacy, and he’s not worried about that zero. I think let’s see after Saturday night, and we can sit down and talk,” said Diaz.

Devin may have overlooked Jojo

“I think Devin might be disappointed because the Teofimo fight didn’t materialize because of his loss, but I do think Devin was overlooking Jojo from the get-go because he was already thinking about Teofimo,” said Diaz.

“We’ll see on Saturday night how crucial that is. I don’t think there should be pressure on Haney; a win is a win. Jojo has never been dropped, never been hurt in a fight. His chin speaks for itself. He started at 122 and moved up to 130.

I think if one or two more fights if he had a couple of fights at 135, he even would have stopped Fortuna. Jojo is not depleting; he’s eating to make weight, but he’s strong and fast, and that’s what I like,” said Diaz.

It’s pretty apparent that Haney has been dialed in about the fight with Teofimo Lopez, and he’s likely going to be in for a letdown on Saturday night fighting with nothing to look forward to.

To be sure, if Haney defeats the former IBF super featherweight champion Jojo Diaz Jr. on Saturday night, he could potentially be picked out by undisputed champion Kambosos Jr for a clash in Australia, but that’s not a given.

Kambosos’ promoter Lou DiBella said this week that there are more popular fighters out there for George to fight than Haney.

One of the names that DiBella mentioned is Ryan Garcia, who has a tremendous following on social media with one million followers. If Haney beats Jojo, he might be stuck fighting #1 WBC Vasily Lomachenko, which could be a total disaster for him. 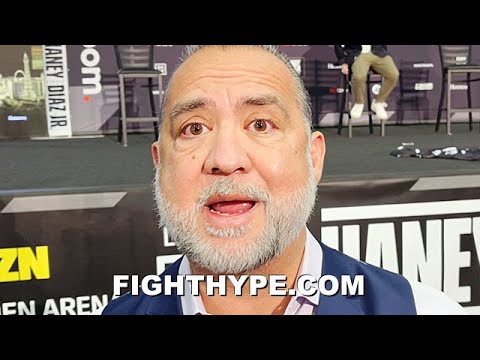