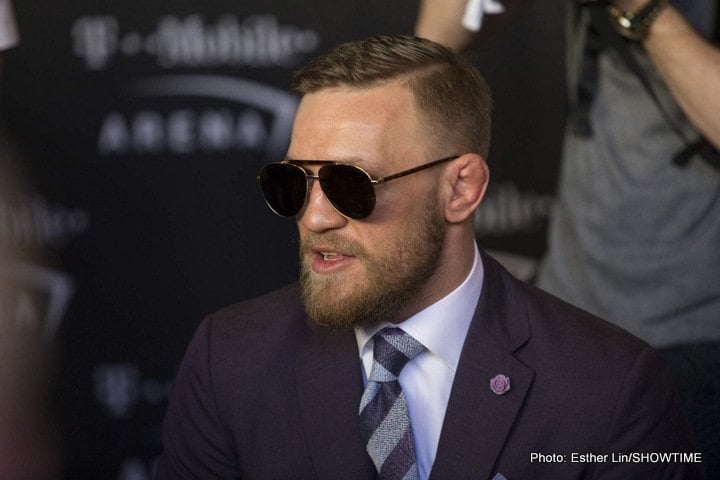 Ahead of one of the richest fights of all time, ‘Freddie’ Flintoff – William Hill’s new brand ambassador – was tricked into believing he was conducting a phone interview with ‘Conor McGregor’ for the William Hill Boxing Podcast with Robbie Savage. Unbeknown to Freddie, he was interviewing the impressionist, Al Foran.

Freddie was ‘punted’ by Robbie Savage after convincing the England legend that William Hill had secured a radio interview with the Irish fighter from the bookmakers’ Leeds studio. Foran impersonated McGregor at the fighters’ training camp, appearing disgruntled at the inconvenience of the early morning phone interview.

After a frosty start to the interview, Foran silenced Flintoff with a series of brash responses, before accusing him of “licking his a***” and referring to him as “a former fat cricketer”. As Foran ended the interview in a rage, Savage revealed to William Hill’s latest ambassador that the whole call had been a hoax.

Freddie Flintoff said, “As someone that never gets done, I’ve got to hand it Robbie. He had me hook, line and sinker. I knew that Conor was unlikely to have much free time ahead of his record-breaking bout but with William Hill’s history of sponsoring boxing, I didn’t question the interview. All I’ll say is that Robbie better watch out as I’ve been chatting to William Hill about our next appearance!”

Robbie Savage added, “Freddie is one of my best mates and we often wind each other up. I am usually on the receiving end so it’s nice to get one back on him, Al’s impression of Conor was spot on. It’s great to get one over Freddie, that I know he won’t forget! As William Hill ambassadors, I think we’re going to have a lot of fun together.”

Tony Kenny, Head of Consumer & Sponsorship PR, William Hill, said: “This is why everyone loves Freddie, he enjoys a joke as much as a fan on the terraces. When Robbie mentioned the idea, we thought it was a great means to launch the fact that we won’t be beaten on any price for Mayweather or McGregor to win! It’s a huge fight and we expect over £100 million+ to be waged on the fight.”

The prank call marks the start of Al Foran’s partnership with William Hill. Foran will be streaming live content and odds from Las Vegas at www.facebook.com/alforancomedy.

To win by KO

Mayweather vs McGregor on TalkTalk TV

On Saturday 26th August, TalkTalk TV customers can watch the unbeaten Floyd Mayweather take on Conor McGregor for only £19.95.

After months of build-up, this super-fight will see Floyd Mayweather return to the ring at the T-Mobile Arena in Las Vegas after a two-year break from boxing to take on UFC lightweight champion Conor McGregor. All eyes will be on the ring to see if McGregor, who has never taken part in a professional boxing fight, can break Mayweather’s historic 49-0 record.

TalkTalk TV customers will be able to enjoy an explosive night of world class boxing from the comfort of their own home from midnight via Sky Sports Box Office, channel 419.

Fans can enjoy watching the eagerly anticipated fight on repeat at 10:00am and 17:00pm on Sunday 27th August, while TalkTalk’s Plus TV customers can record the fight and re-watch until Tuesday 29th August.

TalkTalk TV is offering access to more sport than ever before. Not only can boxing fans keep up with all the ringside action on Box Nation, all TalkTalk TV homes have access to every major televised football match – including Premier League and UEFA Champions League fixtures – live on a single platform, through TalkTalk’s Sky Sports boost and through access to BT Sport. Viewers also have the choice to watch international cricket, rugby, Formula One and action from golf majors. Available for 30 days at a time with no ongoing commitment, TalkTalk TV’s boosts offer choice and flexibility at great value. As with all TalkTalk TV boosts, the Sky Sports package is a flexible 30-day rolling boost, with no long-term commitment.

‘#49to1’ recorded by Mick Konstantin ahead of Saturday’s historic fight

Mick Konstantin, the Irish school teacher, who’s song ‘There’s Only One Conor McGregor’ became a viral internet hit, was watched by millions globally and achieved world-wide acclaim due to its catchy lyrics, has released his second song about the combat sport star.

Entitled ‘#49to1’, and created in partnership with McGregor’s sponsor, Betsafe, the new song tells the story of how he believes fight night in Las Vegas is going to play out with a nod to ‘The Notorious’ ending Mayweather’s hopes of breaking Rocky Marciano’s 49-0 record and reaching 50-0.

The full song and video is available here:

Lyrics to ‘49to1’ by Mick Konstantin
McGregor is going to knock him out going to get the job done. Make history at 49 to 1.
Won’t take a step back from the first minute. Cos Conor McGregor yeah he’s in it to win it.
Some say it’s in the lap of the gods, but Betsafe say passion will over come the odds.
On Saturday night with Ireland’s favourite son. When he knocks Mayweather out at 49 to 1.
Betsafe, who announced McGregor as an official brand ambassador, are offering odds of 49/1 to all new customers that McGregor will defeat Mayweather in Las Vegas.
For more information on the odds and a full wide range of Mayweather v McGregor fight betting markets, please go to: www.betsafe.com