Coach Malik Scott views the delay for his fighter Deontay Wilder’s trilogy match against WBC heavyweight champion Tyson Fury as a positive because it now gives them more time to prepare for the fight on October 9th.

Although Malik isn’t saying what he feels is the true reason for Fury (30-0-1, 21 KOs) pulling out of the fight, he may believe he wasn’t ready physically to get back in the ring with the big-punching Deontay.

Fury has been a man about town since his victory over Wilder last year, and he’s been lapping up the compliments from the back-slappers.

“It’s a great thing. I said Fury wasn’t making it out of five rounds before. But now, since we have more time, it’s really about to get ugly,” said trainer Malik Scott to Talksport about the postponement of the Fury vs. Wilder 3 fight.

“So, if anything, I just felt bad for Deontay because it’s the third postponement that has happened to him for the trilogy.

The adoration that has been poured over Fury’s head by the bucket full apparently has slowed his progress to getting back to the grindstone.

When you’re getting complimented the way Fury has by his fans, it’s got to be hard for him to go back to the torture of training camp.  Also, this wasn’t a fight that Fury.

To be sure, the ‘Gypsy King’ Fury didn’t want to face Wilder a third time, as the money he’s going to get is nowhere near the $100 million smackers that he would have gotten had his undisputed clash with IBF/WBA/WBO champion Anthony Joshua ahead for August 14th.

Moreover, there had been nasty rumors about Fury getting knocked about by his young 21-year-old sparring partner Jared Anderson during preparation for the July 24th fight against the 6’7″ Deontay.

Obviously, getting poleaxed by Anderson might have had a negative effect on Fury’s mindset, causing him to hesitate about plowing into the trilogy fight with the devastatingly powerful Deontay.

The rumors are that Anderson knocked Fury out in sparring and that he’d been battering the living daylights out of him daily.

“Either way, more time we get to marinate Fury is going to make the taste of victory even sweeter,” said Malik about Deontay, ready to drink up the glory from a victory over Fury.

“I’m not leaving camp until Deontay Wilder is the two-time heavyweight champion.”

With Fury, you just don’t know the deal with this guy for his postponement of the trilogy match with Deontay. What we do know is this is the second straight time that Fury has failed to come through for a big fight, and it’s starting to be forlorn with how important matches involving him continue to fall through. 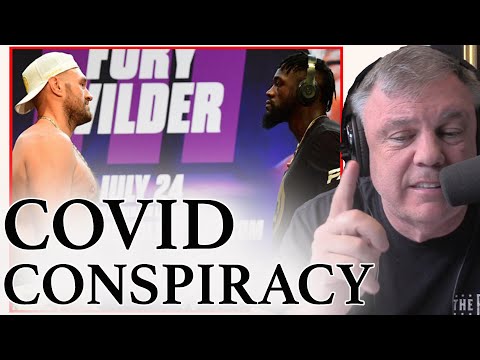 First, it was the Joshua fight that had been pegged for August 14th. Poor Eddie Hearn worked his fingers to the bone to get that match over the finish line, only to have it implode after the U.S arbitrator choosing to rule in Deontay’s favor.

If Fury hadn’t walked away from his contractual rematch with Deontay in the first place, it wouldn’t have been an issue.

Hearn is now jaded about Fury, believing that his October 9th fight with Deontay won’t happen. Something will take place that causes that to get postponed as well, predicts Hearn.