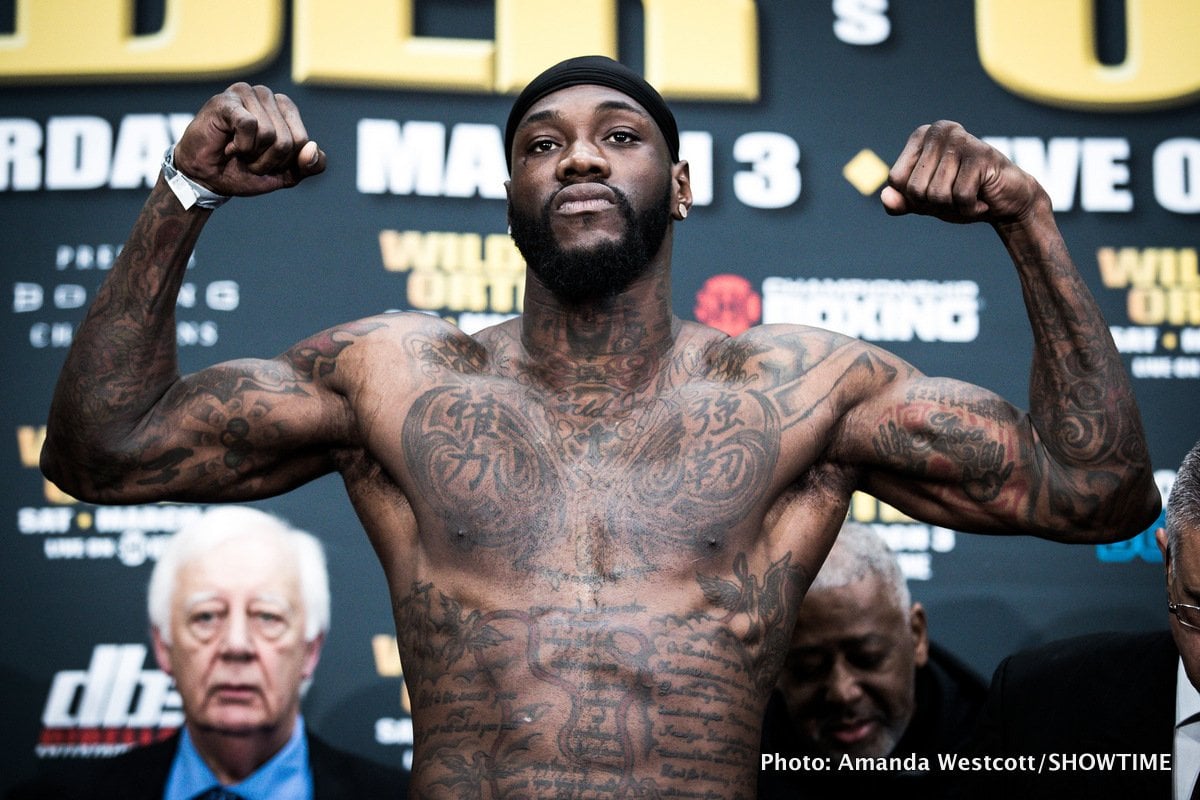 It seems one heavyweight super-fight has been replaced by another massive showdown. Fans are tired of the whole Anthony Joshua-Deontay Wilder scenario, yet now seemingly have a reason to be optimistic about seeing WBC king Wilder get it on with another British superstar: Tyson Fury.

Fury tells us the fight will happen, and Wilder, in speaking with RingTV.com, says likewise. In fact, Wilder, who rates Fury as “The Man to beat to become The Man,” says a fight between he and the lineal champ is “closer than a Joshua fight ever was.” Whether it’s this year, maybe in December, or next year, maybe in April, Wilder assures us this fight WILL happen.

“I believe 100 percent that this fight is going to happen and it’s going to get done,” Wilder told Ring Magazine’s Mike Coppinger. “We’re very, very close. Very, very close. Closer than Joshua and me could ever get in a lifetime. It’s definitely gonna happen, there’s no doubt. There’s just a little more work to be done. Me and Fury, we talked with each other back and forth; I think he’s a great guy, we have a relationship together, and my team has a relationship with his team. This is going to be better than Joshua when it all boils down to it … and we know Tyson Fury, in many eyes, is still the champ, he hasn’t been defeated. He’s still undefeated. He’s still the lineal champion. Once I knock him off, I become that man who beat the man.”

While a Wilder-Joshua fight would have been two monstrous punchers going at it, Wilder against Fury will in many ways be a classic boxer Vs. puncher match-up. Fury, if he can put in a performance similar to the one he gave when he relieved Wladimir Klitschko of his world titles almost three years ago, will be in with a great chance of outboxing Wilder and winning a decision. Then again, Wilder has shown us time and time again how it only takes one punch from him to terminate a fight.

Wilder says he “has to keep the [KO] streak going,” and that he will “figure out” Fury and stop him in the middle-rounds:

“He’s a guy that’s ready to go, he’s seen what’s been happening to me with this whole situation, and he’s disgusted because Joshua is British as well, and they see he didn’t want to fight,” Wilder went on. “So he’s being a man, stepping into my backyard and doing something their other so-called champion wouldn’t do, so mad respect from me. He’s ready now, I’m still ready and we’re going to put on one of the biggest heavyweight title fights in boxing. We got two talkers that’s going to promote the sh– out of the fight. Maybe the knockout of the year and the fight of the year all in one night. I’m going to have to figure him out at first, but I’m going to knock him out of there for sure – mid-round stoppage. I gotta keep the streak going. Bam, good night.”

As we know, Klitschko couldn’t figure out Fury and he was largely unable to land any hard shots on target. Will Wilder have the same problem? In some ways, a Wilder-Fury fight will match together two of the most unorthodox heavyweight champions ever. Who wins this one? There are at least five or six possible outcomes that can be pictured. This alone indicates a fascinating, and hopefully exciting, fight.