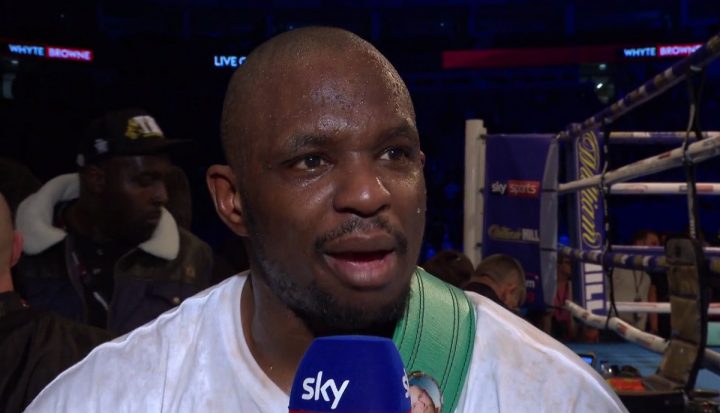 Fresh off his tough, off the canvas decision win over former WBO heavyweight champ Joseph Parker, Britain’s Dillian Whyte has massive plans. The once-beaten contender wants that big rematch with WBA/IBF/WBO ruler Anthony Joshua – AJ being the only man to have beaten “The Body Snatcher” – but Whyte says he needs a fight in December before tackling Joshua at Wembley in April.

Then, Whyte told Sky Sports, he wants to fight Deontay Wilder and become the undisputed heavyweight king. First things first though, and Whyte says he needs a December fight to fully prepare himself for the big title fight, or fights, he says he is more than due. And Whyte has two fighters in his cross-hairs for December: Tyson Fury and Manuel Charr.

Charr actually holds a version of the WBA heavyweight title (a belt he is set to defend against Fres Oquendo later this year), while Fury is of course a huge name. Whyte says he would fight either man before the end of the year.

“I want either Fury or Charr next,” Whyte told Sky Sports today. “Charr has the WBA belt so why not, it’s a good fight, he’s a great fighter and will come to fight. Whether he wants it is a different story, I know I do and it can be made. It’s time I got a shot. Then there’s Fury. The guy’s a joker and a mess, mentally and physically, he’s irrelevant right now. He’s saying he wants to fight Wilder, but he’s talking rubbish, that won’t happen and it makes no sense right now. Fury-Whyte is a great fight, let’s get it done. It’s more realistic him fighting me. If he wants a real fight, we can get it on in December, it’ll have the money and hype, and it’ll be massive. It’s a proper British dust-up and will be a better fight than him against Wilder.”

Whyte says that he and Fury sparred years ago and he said, intriguingly, how Fury “knows what happened.” If Whyte is correct and that big Wilder-Fury fight will not take place (Wilder, Fury and Frank Warren say it will happen), maybe he will get his chance at the lineal champ. Or is Fury holding no interest at all in fighting Whyte? It would, as Whyte says, be a big one, that’s for sure.

Whyte is sure he would beat Fury, and then go in with AJ and then, after winning that, a massive fight with Wilder (who, of course, Eddie Hearn has tried to get Whyte a fight with a number of times).

“Fury knows what happened the last time we shared a ring,” Whyte said. “I’m not going to talk about sparring stories but he knows. I’d fight Tyson Fury tomorrow at a drop of a hat. Let’s face Fury in December, then Joshua at Wembley and then Deontay Wilder to become the undisputed king. I could go in as a world champion for the AJ rematch if I beat Charr first which would make it huge. I will always want to fight Joshua, we have that rivalry. I know I will beat him when the time comes.”

Whoever winds up facing who out of this bunch of heavyweights, one thing has to be agreed on, and that’s that the current heavyweight division is as exciting as it has been in quite some time. Can Whyte avenge his loss to Joshua? Can Whyte topple Fury? Or will Wilder and Fury actually rumble this year? Either way, it seems we are in store for some big and thrilling heavyweight match-ups over the coming months.