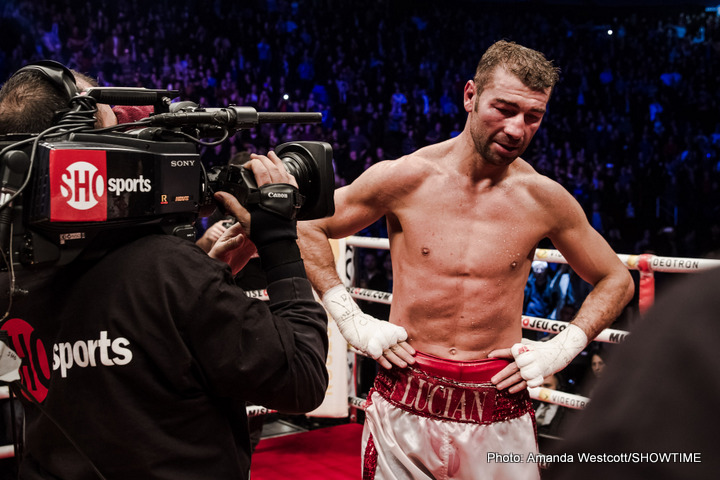 IBF super middleweight champion James DeGale (22-1, 14 KOs) retained his IBF title tonight with a less than thrilling 12 round unanimous decision win over 35-year-old Lucian Bute (35-3, 25 KOs) from the Vidéotron Centre in Quebec City, in Quebec, Canada. Bute, 35, had the crowd on his side the entire fight, and they did a good job of motivating him during the championship rounds.

DeGale threw more shots, but he didn’t get the kind of power on his punches that Bute did. Part of the problem that DeGale had was he was cut over his left eye in the 5th. The cut changed how DeGale fought in the last seven rounds of the contest. He used more movement, jabbed more, and didn’t stand still for any length of time.

In the co-feature bout, the result was just as controversial as the main event with unbeaten #2 WBC light heavyweight contender Eleider Alvarez (19-0, 10 KOs) defeated #1 WBC Isaac Chilemba (24-3-2, 10 KOs) by a 12 round majority decision that could have easily gone the other way. Alvarez gassed out in the same way that DeGale did in the second half of the fight. The judges score the fight 114-114, 118-110 and 115-113 for Alvarez. Chilemba appeared to do enough to deserve the win.

The win makes Alvarez the WBC mandatory challenger for WBC light heavyweight champion Adonis Stevenson. Alvarez has his cut out for him against a quality operator like Stevenson. Alvarez will need to raise his game considerably because Stevenson has a way of taking the judges out of his fights. It’s safe to say that Alvarez won’t win a controversial decision over someone like Stevenson.

In easily the best fight on the card, Adrian Granados (17-4-2, 12 KOs) survived a 1st round knockdown to come back and stop the hard hitting Amir Imam (17-1, 12 KOs) in light welterweight action. Granados wore Imam down and had him badly hurt in the 8th round when the fight was stopped at 2:34 of the round.

Imam blew his chance of getting the victory when he failed to jump on Granados to finish him off after badly hurting him in the opening round. Imam likely assumed that he would be able to finish him off at any time because it was so easy for him at first.

Heavyweight Oscar Rivas (18-0, 13 KOs) made quick work of Joey Abell (31-9, 29 KOs), knocking him out in the 2nd round. Rivas dropped Abell with a series of hard power shots to the head to get the knockout.