Carl Froch, for many one of the greatest yet at the same time most underrated British ring warriors, perhaps scored his greatest win a decade ago this week (May 26). Certainly, Froch, when he smashed an unbeaten Lucian Bute to painful defeat, scored the most important win of his pro career.

Going into the fight at Froch’s Nottingham fortress, the feeling was one of, ‘well, Carl’s had a good career, and if he loses tonight, he can go out with his head held high.’ 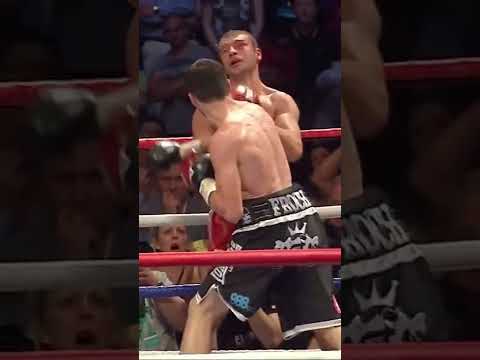 Less than five rounds of thoroughly one-sided action later, the PARTY was in full swing (older British fight fans must have had an absolute ball when Randy Turpin upset the Great One, Sugar Ray, back in the 1950s!)

Froch was coming off a dull loss to the masterful if far from exciting Andre Ward, this in the final of the (it-took-far-too-long-to-reach-its-conclusion Super Six tourney) and “The Cobra” had also lost to Mikkel Kessler, this a year-and-a-half earlier in a Super Six semi. Romanian/Canadian Bute, on the other hand, was a perfect 30-0 and he had ruled as the IBF 168 pound champ for getting on five years. Froch, Bute’s tenth challenger for the belt, was widely expected to be the 32 year old southpaw’s next victim.

But Froch was on fire and Bute, who appeared nervous and apprehensive in the lead-up to the fight, was soon to be badly burnt.

The house was full of British boxing stars – Barry McGuigan, Amir Khan, Jamie Moore, Tony Bellew, George Groves (who would soon have his own rivalry with Froch) and others being on hand – and they were all hoping, rooting, for a Froch win. The great Sugar Ray Leonard was also in the house. The bookies had 34 year old Froch listed in some places as a 4/1 dog; this a nasty hand to a former champ. Froch may have lost to Kessler, to Ward, yet he had shown his ability, and his sheer toughness, in wins over Jean Pascal, Jermain Taylor, Andre Direll, and, more recently, Arthur Abraham.

Froch turned in a career-best performance on the night of May 26, 2012.

Froch ambushed Bute, pushing him back from the opening bell and not letting up. Froch was faster, more powerful and far more self assured. In the third, Froch had his man where he wanted him, battering Bute as the defending champ was on the ropes. The crowd was nothing short of deafening by this stage and Froch was surely about to get the smashing win.

To his credit, Bute had a better round four, before he was totally overwhelmed in the next frame. Froch stunned Bute with a big right hand and the relentless follow-up blows had Bute crumbling into the ropes. The ref came in to administer a count yet Bute’s corner had seen enough, opting to wave the white towel.

“If I’d lost tonight, I’d have retired,” Froch said in the post-fight interview.

Maybe he would have. Instead, Froch was just beginning to have his defining fights.

It was a great night ten years ago, and a great performance. Froch destroyed a fine champion, this at a time when his own career seemed to have reached its peak.