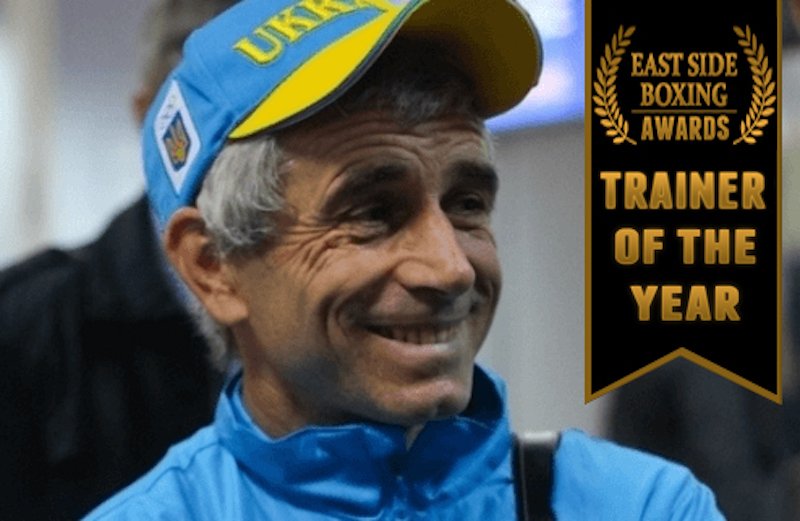 Anatoly Lomachenko is our pick for Trainer of the Year in 2018. Photo © 234Fight

Anatoly Lomachenko—more affectionately known in boxing circles as ‘Papachenko’—tops our list as East Side Boxing’s 2018 trainer of the Year.

Perhaps best known for his unorthodox training techniques, which emphasize cognitive aptitude and physical fitness, Papachenko continued to lap the field by helping his primary charges, Vasyl Lomachenko and Oleksandr Usyk, soar to new heights in 2018.

On Papachenko’s watch, Vasyl Lomachenko turned in another banner year, stopping Jorge Linares (in a FIGHT OF THE YEAR candidate) and besting José Pedraza to become a unified world champ at lightweight.  Stablemate Oleksandr Usyk, East Side Boxing’s 2018 Fighter Of The Year, won the World Boxing Super Series and became the undisputed world cruiserweight champion.

Usyk and Vasyl Lomachenko are also recognized in the top-10 pound-for-pound lists compiled by ESPN, The Ring, and the Boxing Writers Association of America.

If that’s not #WINNING and Crushing It! Gary Vaynerchuk-style as a trainer, then I don’t know what is. 

  Did we get it right? Email us with your comments and we’ll include the best ones in a future mailbag.

  Also be sure to visit Eastsideboxing during the final week of December, when we’ll unveil more of our award winners, followed by a complete list of winners, runners-up, and honorable mentions for 2018 in early January.

Editor’s Note: This selection was made by Paul R. Jones! and Justin Jones on behalf of EASTSIDEBOXING.

Paul R. Jones! is a boxing writer and ringside photographer for EASTSIDEBOXING. He joined ESB in 2011. A scientist by day, and disruptive boxing wonk and writer by night, Paul covers the humorous, offbeat, and absurd from the sport of boxing. Paul’s articles have appeared in PEDIATRICS, Race and Social Problems, and Motivation and Emotion, and he’s covered boxing for BOXINGINSIDER, TheFightJournal, BOXINGNEWS24, and WRAPSONTV. Follow him on Twitter here: @boxingepicenter. Or e-mail him at prjones1@hotmail.com.