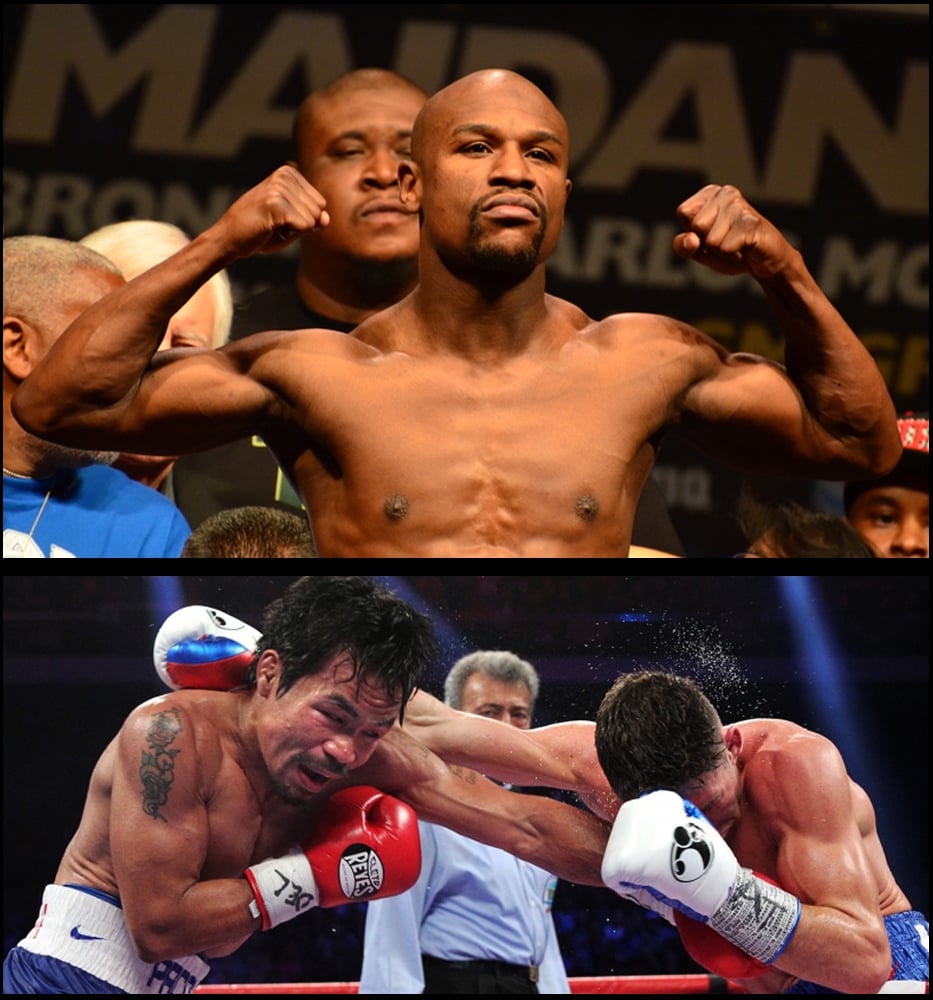 Attitudes and social consensus surrounding “Mayweather vs. Pacquiao: The Fight of the Century” are mixed

It’s a forgone conclusion that tonight’s welterweight clash between Floyd “Money” Mayweather Jr. (47-0, 26 KOs) and Manny “Pac-Man” Pacquiao (57-5-2, 38 KOs) will be the highest-grossing fight in boxing history. Mayweather also remains the betting favorite among many Las Vegas oddsmakers and sportsbooks. For example, Sportsbook’s current line is Mayweather -200, Pacquiao +170 and, according to the Westgate Las Vegas SuperBook, Mayweather’s implied winning percentage hoovers around 65%. Public opinion varies concerning the winner of tonight’s tilt, however.

Among the boxing cognoscenti, it appears that Mayweather is simply too good to fail. A recent straw poll conducted by the Las Vegas Review-Journal among 45 journalists, boxing insiders, and folks who make a living handicapping the sweet science, found that 76% of respondents expect “Pretty Boy” Floyd’s unblemished record to remain intact after facing Pacquiao. Most participants expect Mayweather to win by decision.

Despite the unprecedented hype, however, there is a faction of sports pundits and analysts doubting that Mayweather vs. Pacquiao will live up to its lofty expectations. In a March 2015 conversation with Thom Loverro of the Washington Times, following a Keystone Boxing card in Washington, DC, the longtime columnist and co-host of ESPN980’s The Sports Fix summarized the fight in eight words. “I think Mayweather has his way with [Pacquiao],” explained Loverro.

Esteemed sportswriter and co-host of ESPN’s Pardon the Interruption, Michael Wilbon, also maintains that Mayweather would beat any rendition of Pacquiao, past or present. Nevertheless, Wilbon remains steadfast that boxing’s top money-spinner ducked the Pac-Man throughout his career.

The consensus among boxing fans and casual observers is mixed, however. For example, a recent non-scientific poll hosted by ESPN’s Pollcenter (sample size = 21,727) favors the Pac-Man to beat Mayweather (57% to 43%), whereas a larger ESPN survey of over 134,000 voters favored Mayweather to win by decision (37%). A survey of about 3,000 online readers of The Ring indicated that, at the very least, most respondents (45%) believe that the fight will live up to the hype.

Eastsideboxing.com also surveyed a few fighters, media members, and fans to get their predictions on the winner of Mayweather vs. Pacquiao. Below are a few noteworthy anecdotes:

“Of course, I’m picking Mayweather. He’s still undefeated, still at the top of his game. He’s the bigger man and he normally figures things out in there. I trust that he’ll figure out Pacquiao’s style and win the fight. But, for some reason, I can see Pacquiao winning the fight too. If I had to go with a pick right now it would be Mayweather.”

“I honestly think Manny Pacquiao will beat [Mayweather]. If you look at Floyd and the people that have given him problems, it’s been volume punchers. . . . I think Manny Pacquiao, being a fast southpaw, with all of his movement, will give Floyd problems.”

“I see Mayweather winning because I think that he can adjust better than anyone in the business and I think he will find a way to beat Pacquiao. Pacquiao is an aggressive fighter and that may be tailor made for [Mayweather]. I think Pacquiao has a shot. If nothing else, he has a puncher’s chance. But, I think that, on the whole, Mayweather is just a better fighter . . . and he’ll go on to a unanimous decision. ”

“I think Floyd gets a UD 8 rounds to 4. He’s not going to take any risks [and] he’ll probably counter and box well. Manny will have his opportunities, though. Floyd stays in the pocket more now that he’s older.”

In sum, most of those surveyed by ESB picked Mayweather to win. Nonetheless, whether Mayweather will silence the critics and naysayers with the most significant win of his illustrious career remains an open question. Whether Pacquiao will derail Money May’s pursuit of perfection is also unknown. Fortunately, the answers to these questions are merely hours away.