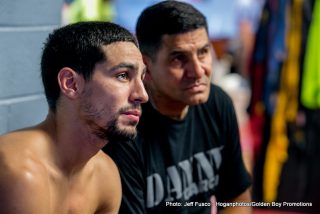 Oscar De La Hoya
Thank you very much, Kelly. Yes, we are very excited. We are getting closer to the great night of fights that we will be having at the Barclays Center in Brooklyn, New York. As you know the main event is Danny Garcia vs Rod Salka, which will be a 10-round Welterweight fight. The co-main event, Lamont Peterson vs Edgar Santana will be a 12-round for Peterson’s IBF Junior Welterweight World Championship.

The fight we’ll be talking about now is Daniel Jacobs vs Jarrod Fletcher. That will be a 12-rounder for the WBA Middleweight World Title. This event is coming from the Barclays Center in Brooklyn, New York, promoted by Golden Boy Promotions. We are happy to be in association with DiBella Entertainment. We are also happy to announce that Daniel Jacobs vs Jarrod Fletcher is being promoted in association with Greg Cohen Promotions. 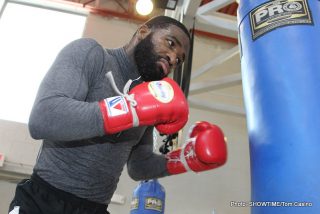 Broner will face talented young prospect Emmanuel “Tranzformer” Taylor in a 12-round super lightweight bout. In the co-main event, scheduled for 10 rounds in the same weight class, Argentine powerhouse Lucas “La Máquina” Matthysse will attempt to continue his road back to the top of the 140-pound division when he meets unbeaten Mexican slugger Roberto Ortiz.

In the opening bout of the live SHOWTIME telecast (9:30 p.m. ET / 6:30 p.m. PT) former two-time world welterweight champion Andre Berto (28-3, 22 KO’s) will return to the ring after a one-year layoff and shoulder surgery against an opponent to be determined.

WASHINGTON, D.C. (July 31, 2014) – The August 9 Barclays Center fight card will have plenty of D.C. flavor with District-natives Lamont Peterson, Anthony Peterson plus Maryland’s D’Mitrius Ballard all appearing in the event.

As they prepare for their respective bouts, the three talented boxers held an open media workout in Washington, D.C. on Thursday afternoon. Here is what the participants had to say: 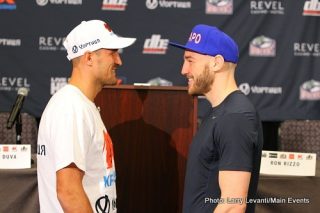 ATLANTC CITY – The final press conference was held today for the August 2 title fight between Sergey “Krusher” Kovalev, 24-0-1, 22 KO’s and Blake “Il Capo” Caparello, 19-0-1, 6 KO’s. Kovalev is putting his WBO Light Heavyweight belt on the line at Revel Casino Hotel in Atlantic City. The 12-round fight will be the second fight in an HBO Boxing After Dark triple header presentaton this Saturday night. The HBO telecast begins at 9:45pm ET/PT.

Johannesburg, South Africa’s Isaac Chilemba, 22-2-2, 9 KO’s, will square off against Cory Cummings, 17-6-1, 13 KO’s of Newark, NJ in a 10-round light heavyweight co-feature bout that will not be shown on HBO but will inernationally televised.

Here’s what was said at today’s final press conference.

FAIRFIELD, CALIF. (July 31) – For the first time in two years, top junior featherweight prospect Manuel “Tino” Avila will compete in his hometown of Fairfield, Calif. at the Allan Witt Sports Center and puts his undefeated record on the line in the FOX Sports 1 and FOX Deportes’ Golden Boy Live! main event against Mexico’s Sergio “Finito” Frias on Friday, August 22.

BROOKLYN (July 31, 2014) – Rod Salka, Edgar Santana and Jarrod Fletcher are all, understandably, being referred to as underdogs heading into their respective fights Saturday, Aug. 9 at Barclays Center in Brooklyn. But the overlooked fighters are all relishing in their opportunity to pull off the upset and shock the world, live on SHOWTIME CHAMPIONSHIP BOXING®.

In the main event on SHOWTIME, Unified Super Lightweight World Champion Danny “Swift” Garcia will face the hungry “Lightning” Rod Salka in a 10-round welterweight bout. In the co-feature, IBF Junior Welterweight World Champion Lamont Peterson will risk his title against veteran contender Edgar Santana in a 12-round match. In the opening fight of the telecast, Brooklyn’s own Daniel Jacobs will take on once-beaten Australian Jarrod Fletcher for the vacant WBA Middleweight World Title.