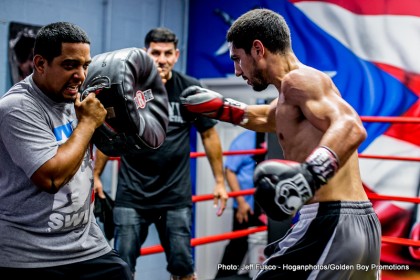 Garcia, along with his father and trainer, Angel Garcia, spoke to the media about the upcoming fight and trained in front of the cameras. With fight night just over a week away, here is what the two had to say on Wednesday:

“To me, it doesn’t matter, title fight or not, at the end of the day it’s my show and I’m going to put on a great performance for the fans.

“I can guarantee one thing, on Aug. 9 it’s going to be an exciting fight and people who don’t watch it are going to miss out.

“I always go for the knockout. I need a knockout. I haven’t had one since Morales back in Brooklyn so I’m definitely going for it.

“Everybody is entitled to their own opinion. I can’t control what people are going to say. All I can do is go in there August 9th and fight hard for my fans.

“Someone is going to get hurt and it isn’t going to be me.

“The last mandatory I knew I had was Lucas Matthysse. As far as the rankings though, I don’t really pay attention to that.

“No matter how I win, I believe August 9 is going to be a great show. Brooklyn has a great atmosphere for fights.

“Both Salka and [Mauricio] Herrera move a little bit, they’re about the same height so there are some similarities. I was focused last fight [against Herrera], but I made a lot of mistakes. I’m not making any mistakes this time around; you’re going to see me on my A-game.

“We’re more focused as a team this camp and more disciplined. We’re doing everything right. There’s a lot of chemistry. I’ve sparred over 100 rounds already and we’re prepared.

“My dad is fired up, he’s been classic Angel Garcia. He was more quiet last fight, but he’s back now. I’m calling August 9 ‘The Purge’ because team Garcia is going to purge Barclays Center.”

“wasn’t disappointed about it not being a title fight, there’s nothing we can do. Everybody has a job, I’m here to train Danny and he’s here to fight.

“I don’t really watch tape. That’s old thinking. I watched the Herrera fight just to get the doubt about it out of my head, but that’s just from the media. They made it seem like Herrera destroyed Danny, but I didn’t see it like that.

“What happens when you get all this negativity in the media about a performance, the next person you’re going to fight feels the consequences. Salka is in a predicament right now. He’s in the wrong place at the wrong time.