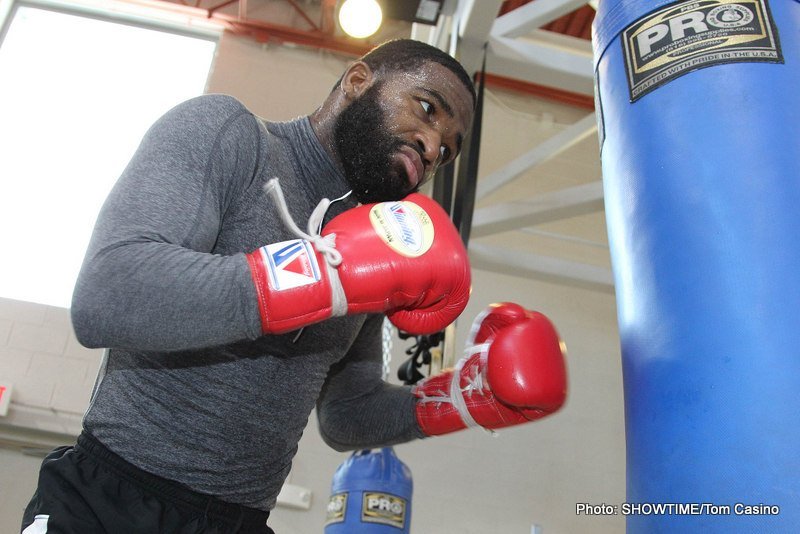 Broner will face talented young prospect Emmanuel “Tranzformer” Taylor in a 12-round super lightweight bout. In the co-main event, scheduled for 10 rounds in the same weight class, Argentine powerhouse Lucas “La Máquina” Matthysse will attempt to continue his road back to the top of the 140-pound division when he meets unbeaten Mexican slugger Roberto Ortiz.

In the opening bout of the live SHOWTIME telecast (9:30 p.m. ET / 6:30 p.m. PT) former two-time world welterweight champion Andre Berto (28-3, 22 KO’s) will return to the ring after a one-year layoff and shoulder surgery against an opponent to be determined.

“It’s always good to fight at home,” said Broner, who, in his last bout at U.S. Bank Arena in July 2012 stopped Vicente Escobedo in five rounds. “It’s overdue. I will not disappoint my Cincinnati fans. I’ll make sure to put up a good show for them. Taylor is a young, talented fighter, but he’s not ready to solve this ‘Problem.’”

“This is the biggest fight of my career, and I won’t let it get away from me,” said Taylor, who has raised his profile this year with a marquee win over Karim Mayfield just two weeks ago, and a close decision loss to Chris Algieri in February. “All of those hours in the gym were for a moment like this, and I can’t wait to show the world what I can do in the ring.”

The dynamic punching Matthysse is rebuilding from his stunning decision loss in an incredible fight with Unified 140-pound champion Danny Garcia last September. Matthysse is coming off a thrilling bout against John Molina in April, one that may rank as 2014 Fight of the Year.

“The title is my only goal, and to get there, I have to beat Ortiz,” said Matthysse, who is never in a dull fight. “I’ve heard that he’s a tough fighter, but I’m not worried about him. I just have to make sure I’m ready.”

“I respect Lucas Matthysse and know how dangerous he is, but this is my time to make a statement, and I will on Sept. 6,” said Ortiz, the highly regarded power punching Mexican. “I see holes in his game and I think I’m the better all-around fighter. The world will see that very soon.”

“It’s been a long time and I can’t wait to get back in the ring on September 6,” said Berto. “I feel stronger and better than ever, and I’m ready to make another run at the title. But first I have business to take care of in Cincinnati, and I’ll be looking for the knockout.”

“This doubleheader represents what Golden Boy is all about – scintillating, action-packed fights that will get fans out of their seats and clamoring for more” said Oscar De La Hoya, President of Golden Boy Promotions. “Adrien Broner is a top-level talent who always elevates his game on the biggest stages, and there is never a bigger stage than in front of your hometown fans. But with speed, power and a golden opportunity, Emmanuel Taylor is a tough test. This is a life-changing fight for him, which makes him particularly dangerous. . In the co-main event, one of the hardest punchers in the game, Lucas Matthysse, will also have to dig deep to win when he fights Mexico’s Roberto Ortiz. The winner of this fight should be right in line for a title shot in 2015.”

“The September 6 edition of SHOWTIME CHAMPIONSHIP BOXING delivers big stars and dangerous fights,” said Stephen Espinoza, Executive Vice President and General Manager, SHOWTIME Sports®. “Adrien Broner and Lucas Matthysse are two of the most exciting and entertaining boxers in the sport today, and each is facing a formidable challenge. Broner’s opponent, Emmanuel Taylor, is a very talented young contender who has put together a string of impressive performances. Matthysse will be taking on Roberto Ortiz, who has steamrolled through his competition, piling up knockout after knockout en route to an undefeated record in 32 fights. Add to that the return of fan favorite Andre Berto, and you have perhaps the most action-packed tripleheader of the year.”

An ultra-talented and charismatic athlete who has captivated the boxing world inside and outside the ring, 25-year-old Adrien “The Problem” Broner (28-1, 22 KOs) has won world titles at 130, 135 and 147 pounds, defeating the likes of Paulie Malignaggi, Daniel “Ponce” de Leon and Gavin Rees along the way. In his most recent bout on May 3, the Cincinnati native rebounded from the lone loss of his career to Marcos Maidana six months earlier with a clear-cut 10-round decision win over Carlos Molina.

Fighting out of Edgewood Arsenal, Maryland, 23-year-old Emmanuel “Tranzfomer” Taylor (18-2, 12 KOs) has been on boxing insiders’ top prospect lists for several years, and now he’s prepared to show the world just how good he really is on Sept. 6. Owner of wins over Raymond Serrano, Victor Manuel Cayo and most recently Karim Mayfield, this East Coast warrior is ready for the bright lights against Broner.

Considered by many to be the hardest puncher in boxing today, Chubut, Argentina’s bomber Lucas “La Maquina” Matthysse (35-3, 33 KOs) never disappoints on fight night. An exciting two-fisted banger, the 31-year-old is a former WBC Super Lightweight Champion who has sent Humberto Soto, Lamont Peterson and Olusegun Ajose crashing to knockout defeats. In April, Matthysse knocked out John Molina in the 11th round, and he has similar plans for Ortiz this September.

Ranked fifth in the world by the WBC, Torreon, Coahuila, Mexico’s highly touted Roberto “Massa” Ortiz (31-0-1, 24 KOs) has earned his spot in the rankings with his heavy hands and a willingness to fight anyone. A professional since 2007, the 28-year-old Mexican battler has delivered big wins over Fidel Muñoz and Jorge Romero, and with the ability to knock opponents out or take them into the late rounds, he is a versatile puzzle that no one has been able to figure out yet. Ortiz will be making his first start in the U.S., after campaigning exclusively in Mexico as a professional.

A former two-time world welterweight champion, former Haitian Olympian Andre Berto (28-3, 22 KOs) is consistently one of boxing’s most exciting fighters, a fact he plans on reminding people of on September 6. Fully healed from a shoulder injury suffered during his thrilling 2013 bout with Jesus Soto Karass the Winter Haven, Florida native will celebrate his 31st birthday a day early when he performs for fight fans in Cincinnati against an opponent to be named.

ABOUT “BRONER VS. TAYLOR”

Broner vs. Taylor, a 12-round junior welterweight bout, will be held on Saturday, Sept. 6, and is promoted by Golden Boy Promotions and sponsored by Corona and AT&T. The event will take place at U.S. Bank Arena in Cincinnati, Ohio live on SHOWTIME (9:30 p.m. ET/6:30 p.m. PT) and will be available in Spanish via secondary audio programming (SAP). In the co-main event, Lucas Matthysse faces Roberto Ortiz in a super lightweight bout.