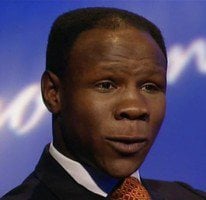 As former European WBO legend Chris ‘Simply the Best’ Eubank celebrated his 49th birthday on Saturday, I look back on the glittering career of the self-styled monocle man.

Eubank turned professional in New York City as a teenager, making his debut in Atlantic City in 1985 following a 26-fight amateur career that included a local win over standout US international star Dennis Milton. Born and bred in London, he had relocated to NYC’s Bronx to start boxing at 16 and really came into his own.

After four quick-fire four-round points wins, Eubank built his reputation in Gleasons Gym and Bronxchester BC, with the late Johnny Bos watching many a sparring session of the young upstart and attempting to sign him.

Eubank returned to the UK at 21 and continued to rank up the wins, his lengthening unbeaten record got him signed on the books of Matchroom Sport, who had just delved into boxing (and still rule today). His victims included world-rated contenders like Anthony Logan and Jean-Noel Camara, world-class gatekeeper Randy Smith and British banger Johnny Melfah (who Nigel Benn as an amateur and Herol Graham as a pro both failed to floor), whom be flattened with a single right hand that couldn’t of travelled more than a few inches!

Chris possessed a particular slickness of lateral foot movement never before seen in a British ring, and short crisp explosive inside punching that many would deem mostly ‘perfect’ textbook shots, particularly lethal and cunning when a man was wobbled or stunned; flurrying with a fury rarely seen in English areans.

He could also speak, dress, pose, walk, pout, think, dance, strut, and be hilarious or infuriate. Needless to say he caught the U.K public imagination and when he frequently called for Brit superstar mega-bomber Nigel Benn’s head, the hype soon reached fever pitch and the contract was memorably signed in a TV studio.

Put simply, it is the finest fight in European boxing history and in many ways the start of modern boxing as we know it today. Eubank overcame Benn’s ferocity that had blown away USA’s toughest and out-lasted the proud WBO champ to capture the world middleweight title in a titanic struggle in which banger Benn split the insides of the articulate one’s mouth and damaged him interally like never before.

Many felt Eubank’s Benn I fight was the true fight of the year for 1990, rather than Chavez-Taylor.

The 1990s were the Golden Era of British Boxing, including Lennox Lewis, Nigel Benn, Frank Bruno and Naseem Hamed. But there was one who stood head and shoulders above the rest – Chris Eubank.

Eubank recently praised recent UK super-middleweight Carl Froch for ‘always being the last man standing or finishing on top’, yet Eubank was the master of this. Who can forget the Benn stoppage, Richard Steele leaping between the flying fists in the last second of the ninth round, with Eubank barely able to raise his arms beyond that last flurry, or the Watson stoppage; floored legit for the first time in his life at the end of the penultimate stanza, only to rise pre-count and deliver a single uppercut that left Watson fighting for his life.

In Eubank’s Benn II fight at Manchester United’s Old Trafford, he closed the show by outworking Benn in the final two rounds, pinning the Dark Destroyer to the ropes to salvage a draw and remain unbeaten world champ. Even in eventual defeat, he floored Steve Collins (first time Collins ever went down from a head punch) having been floored himself from a body punch, then held off, and rocked Joe Calzaghe worse than he ever has been in the dying seconds; again holding back from finishing it when one step back and one uppercut would’ve done it.

He even had Carl Thompson, a 205/210-pound muscular beast, down and all over the place on numerous occasions in their fights, even with one of Eubank’s eyes having closed from a thumb and then re-closed in the quick-fire rematch from the only jab that landed. Eubank was leading, looking strong and hurting Thompson when the doctor stopped that last fight between rounds with Eubank on his feet, pleading for all his worth.

Let’s never forget what a fabulous fighter and man Chris Eubank was. Enjoy the final year of your 40s Champ.