Tyson Fury has put out yet another video on social media, this one to, yes, you guessed it, lay into a couple of his rivals in his own colourful manner. Fury is fuming over the way rival heavyweight champion Oleksandr Usyk has said he is afraid of him, while the reigning WBC heavyweight champ is super-fuming over the way Anthony Joshua has not (yet?) signed the contract for their would-be December 3rd clash.

And, boy, does Fury vent his, well, his fury, in the short video. 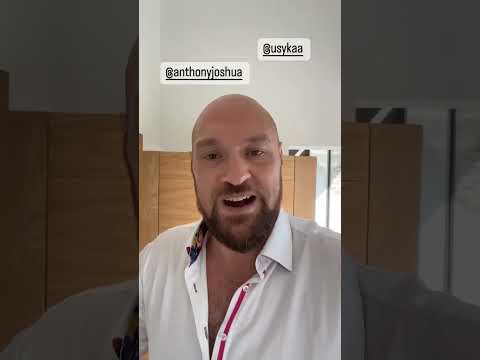 “Usyk – you little sh**house! You little s**t bag! Talking s***e, I’m afraid of you! I’ll put my fist right through the side of you, you little sausage,” Fury began. “And that other s***house, that big bodybuilder Joshua, that’s a proper s***house, that is. That’s had the contract for I don’t know how long and ain’t signing it. You little sausage. You do not wanna fight. Your manager’s a sausage. I’ve never seen anything like yers. Proper pack of s***houses. However, I will be fighting on December the 3rd, if this sausage doesn’t sign the contract, which I don’t think he is, because I don’t think he’s got the b******s to. He’s a s***bag. Both of youse, a pair of little sausage s***houses. Joshua is a s***house. Usyk is a s***house. Youse are all s***houses.”

I’m not sure, but I think Fury might have beaten his record in terms of most foul language spoken in such a little amount of time. Fury really is steaming this time, and we fans are also wondering why Joshua has not yet signed, having had the contract for getting on for a week now.

Are we back to square-one, where Fury will now fight TBA (Manuel Charr, anybody?) on December 3, and was this always going to be the case? It is beginning to look like it. The more time goes by with Joshua not having signed, the less chance there is of this monster of an all-British heavyweight showdown taking place. Usyk does want to fight Fury, next year. If we can’t have Fury-Joshua, at least let’s have Fury-Usyk in 2023.

Expect further insults from Fury over the next few days, unless AJ surprises him (and us), by putting pen to paper after all.