At Friday’s weigh-in, Tyson Fury looked “ill-prepared” physically, according to David Haye, for his trilogy fight against Deontay Wilder this Saturday night in Las Vegas.

Wilder has had surgery on his right bicep, which was out of commission for his previous fight with Fury, and he’s now physically bigger & stronger than ever, says Haye.

When you couple Wilder having his right hand back and Fury looking fat and out of shape at 277 lbs, it’s bad news for the Gypsy King and his many fans that will be watching at home in England.

Haye believes the rejuvenated former WBC heavyweight champion Wilder (42-1-1, 41 KOs) has been totally “underestimated” by Fury (30-0-1, 21 KOs), and he sees an upset on Saturday at the T-Mobile Arena.

It’s difficult to understand why Fury didn’t train hard enough to get in shape for this fight, but Haye thinks it was a motivational problem.

He reasons that because it was so easy for Fury to defeat the one-armed Wilder last time they fought, that he could put in a mere token effort at training camp and still run over him like an 18 wheeler semi.

As poor a shape as Fury looked on Friday, it’s VERY to believe the rumors of Jared Anderson and Efe Ajagba beating him up in sparring to be 100% true. Fury must have been a real sight when he sparred those guys back in July, and you can only imagine how much fat he had hanging off his 6’9″ frame.

“The mindset of Fury, he wasn’t having any. I haven’t ever seen him this amped up prior to a fight,” said David Haye.

“This is him [Fury] really bubbling over, really, really wants to hear that first bell and run across the ring and do to him [Wilder] that he believes he did in the second fight.

“I think he’s whipping himself up whipped up into that crazy man zone where he’s just going to throw the kitchen sink at him.

“I think Wilder has been completely underestimated, and I think Fury, look at him there, he’s pumped up, I think he doubled down on it,” said Haye.

“I personally believe his [Fury] training hasn’t gone anywhere near as good as his second fight has [for Wilder],” said Haye.

It’s pretty obvious in looking at how out of shape Fury was today at the weigh-in that he DID’NT train as hard for this fight as he did a year ago for his rematch with Wilder.

Fury looks like he just put a token effort into training camp, and he must been eating really well for him to be this fat. Was Fury power-feeding or what?

This is bad news for Fury and especially his adoring fans because if he loses this fight, he can forget about the $100 million+ payday against Anthony Joshua near year, provided that AJ beats Oleksandr Usyk in their rematch.

“So he’s less prepared for this third fight than he was for the second fight because he had no motivation for it,” said Haye about Fury. “He’s not the type of guy to go into a fight against someone he knows in his heart he can beat to train and push his body.

“He’s not that guy.  So you’ve got Fury here who is ill-prepared vs. Wilder, who has had surgery on his arm to repair his arm and is now bigger and stronger than he’s ever been before.

“I think we’re going to get an upset, and I think more after the weigh-in it’s going to go the other way,” said Haye.

“I was surprised at how well Deontay carried himself and Fury was just going on that rant and kept going and kept going,” said Teofimo Lopez to Fighthype on the Fury vs. Wilder III weigh-in on Friday.

“You could tell at one point that he did get a little bit under Wilder’s skin, talking about his wife. Of course, who wouldn’t. But he has his team to hold him. ‘Don’t  let that get to you.’

“I saw that. Overall, this is just the weigh-in, they’re doing what they got to do. All this that they’re doing and talking about it, it’s going to matter tomorrow night when they’re in that ring.

“Then we get to see, hopefully, Usyk and the winner of this [Fury vs. Wilder III]. That’s what it’s about. The heavyweight division is finally back on its toes,”  said Teofimo. 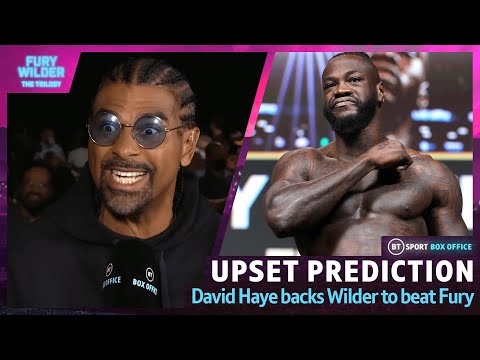