IBF super middleweight champion Caleb ‘Sweethands’ Plant says he’s got a message waiting for Canelo Alvarez and he’s going to find out on November 6th when he gets him inside the ring. Canelo vs. Plant will be shown on Showtime PPV from MGM Grand Garden Arena in Las Vegas.

Plant (21-0, 12 KOs) says Canelo lost his cool in their Los Angeles press conference last month on September 21st because he’s not used to his opponents believing in themselves.

Most of the guys that Canelo (56-1-2, 38 KOs) fights are there for the paycheck and give away their world titles, according to Plant.

He says he has no intention of doing that because he plans on beating Canelo and giving taking his three titles to become the first-ever undisputed champion at super middleweight.

More than anyone that Canelo has faced before, Plant has angered him, and it is hard to know why.

The only thing that makes sense is that Canelo is used his opponents being cowed by him, and not fighting to the best of their ability.

“It would mean everything. That’s the highest pinnacle of this sport,” said Caleb Plant to Boxing Social. “Not just to become a world champion but to unify all the belts and become undisputed.

“If you really take this sport serious, then that’s your goal and that’s been my goal for a long time and I got a big opportunity in front of me. I’m just looking to go in there and let the bell ring and seize that moment,” said Plant.

It would be a massive letdown for Canelo if he lost to Plant on November 6th because he’s spent the last three years of his career slowly collecting titles at 168 in trying to become the undisputed champion.

If Plant beats Canelo, all the hard work and time Alvarez has put into trying to become the undisputed champion will have been wasted.

“He can say whatever he wants, but on November 6th, he’s going to find out for himself,” said Plant in reacting to Canelo saying that he’s not on his level.

Canelo believes he’s better than Plant, and he seems to be annoyed by his self confidence. It appears that Canelo wants Plant to act unassuming and be humble, but he hasn’t been doing that.

“I was calm & cool. He was the one acting out of character, not me,” said Plant. “So if you put your hands on me, that’s a green light. I responded, but he was the one who reacted. He lost his cool.

“I’m not sure why. He’s got someone in front of him that he knows that aren’t just there to pick up a check or hand over a belt, and he don’t like that. I think he lost his cool.

“Then he got up there and tried to get his speech off and couldn’t even talk, he couldn’t even get his words out. So he’s the one acting out of character,” said Plant.

Canelo was struggling with his speech during the LA press conference because he was upset at some of the things Plant had said, and it appears that he wasn’t strong enough with his English skills to get the words out.

“That I’m under his skin somehow, he don’t like me, and somehow his feathers are ruffled,” said Plant about Canelo. “He’s in for a treat. On November 6th, you guys are going to find out.

“You got to carry yourself, walk, talk, train like a champion before you get a belt. That’s how you become a world champion.

“I’m motivated and dedicated and I have been to my craft since I first started. This is a big movement, and I’m just excited to get in there and let that bell ring.

“The key to being successful is being myself. I’ve got all the tools and skills necessary to get my hand raised in that fight.

“It’s a big fight and a lot of stakes on the line and both are ready to prove that they’re right,” said Plant when asked about the Deontay Wilder vs. Tyson Fury 3 fight this Saturday night.

“So when the bell rings, we’re going to find out for sure. 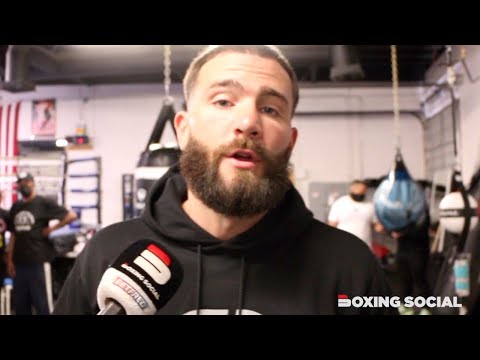 133 thoughts on “Caleb Plant sends a message to Canelo Alvarez”