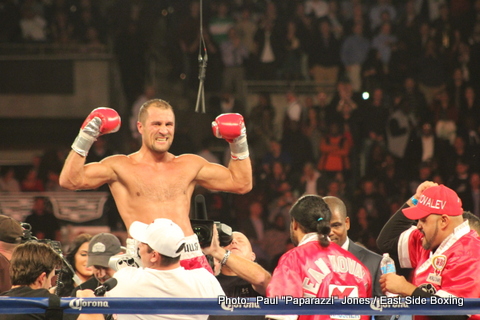 All that Remains is a Win vs. Stevenson to Unify the Light Heavyweight Division

However, after dominating Hopkins on Saturday night by a unanimous decision victory, Kovalev put any lingering doubts that he is the man to beat in the Light Heavyweight Division to rest.

From the opening bell, Kovalev did to Hopkins exactly what he’s done to all his opponents, inflict pain. The 31-year-old Russian star consistently pressured Hopkins, connected on 35% of his power shots, and floored The Alien in the first round with a straight right hand to the temple. From the knockdown forward, Hopkins was forced into survival mode after experiencing Kovalev’s power, relentlessness, and constant work rate.

It wasn’t until final round though, that both men gave the fans their monies worth by engaging in what will undoubtedly go down as a classic round and instant round of the year candidate. Hopkins struck gold first, landing several of his signature lead right hands that wobbled and visibly hurting Kovalev.

But, it was Kovalev who got the best of the entertaining exchanges, reversing the momentum by pummeling the Philadelphian with vicious combinations and devastating head shots that staggered Hopkins. By the end of the round, B-Hop appeared to be virtually out on his feet. To Hopkins’ credit, the 49-year old warrior made it to the final bell in what may very well be his last fight.

When the final ringside scorecards were read, it was 120-107 (twice) and 120-106 all in favor of Kovalev. In the process, Kovalev is the recognized IBF, WBA, and WBO World Champ at Light Heavyweight.

“Bernard is a great champion and he is great at keeping his distance,” an exhausted but joyous Kovalev said post-fight. “He did hurt me with a couple of good shots, but I was able to be patient and land my punches. Bernard is tough and I would like to thank him for the opportunity.”

If it this is the last time we see Hopkins, there is no doubt that he’s an all-time great and a sure bet for the Boxing Hall of Fame. Put simply, B-Hop has nothing left to prove. He’s taken on all comers, including Kovalev, when many others were reluctant to do so. And though thoroughly beaten, Hopkins lasted until the final bell.

“I had a great game plan tonight, but Kovalev used his reach and patience very well,” Hopkins said. “Fans want to see unification bouts like tonight, where there’s one champion and one belt. They pay to see the best fight the best and that’s what we gave them.”

As the unified champion and emerging face of the Light Heavyweight division, there is only one logical opponent for Kovalev and that’s Adonis “Superman” Stevenson (24-1, 20 KOs). A clash between Kovalev and Stevenson would determine who is the last man standing in the division. If Stevenson defeats Dmitry Sukhotsky (22-2, 16 KOs), as expected, there will be tons of drama surrounding their eventual clash. Let’s hope the division’s two remaining alpha dogs can put their promotional and contractual differences aside to give boxing fans what they covet. There’s no disputing that the time is now.