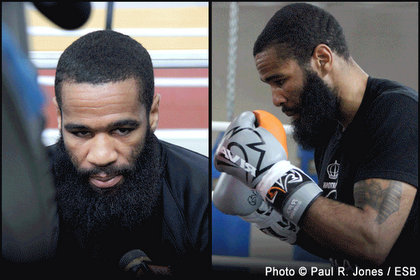 Peterson’s touching backstory of poverty and homelessness in the southeast section of the nation’s capital is well documented. However, it is the 31-year-old’s persistence and hardiness in the face of adversity, coupled with the support of his trainer Barry Hunter, that have him well positioned for a move to welterweight and potential seven-figure payday against the Mayweather vs. Pacquiao winner (or loser) should he take care of business against García. Peterson is not looking ahead, however. He also recognizes that styles make fights.

Though no titles are on the line, Peterson is determined to extend his two-fight winning streak and gain bragging rights as the de facto chieftain among light welterweights. But there’s more. A win over García also gives the DC native a shot at indirect redemption. That is, by beating the man (García) who outclassed Lucas Matthysse (36-3 1 NC, 34 KOs), of Argentina, nearly seven months ago, Peterson can erase some of the lingering public doubt stemming from the most decisive loss of his pro career — an embarrassing May 2013 defeat to the Argentinean mauler mentioned herein.

With García squarely in his crosshairs, Eastsideboxing.com caught up with Lamont Peterson for an exclusive interview after a recent media workout. Here is what he had to say Danny García, whom he would like to meet from the past, and much more:

Eastsideboxing.com (ESB): After beating Rod Salka, Danny García said, “When I’m at my best, I can beat anyone.” What are you planning to do to keep him from being at his best?

Lamont Peterson: “Take away his strengths. Anything that I feel like he’s lacking in or weak at, I’ll try to make him play to that more. It’s all strategy [and] it’s all chess. And it’s may the best man win a lot of times.”

ESB: García also stated, “I’m all about fighting the best fighters. But if [Lamont] wants it, he can get it too.” Did those comments get under your skin at all?

Lamont Peterson: “Nah, because they’ve been asking me who I want to fight and I’ve been saying his name for a while. He hasn’t said anything, so finally he responds. It didn’t get under my skin, it just let me know, ‘O.K., it might happen.’ I was happy to hear that. ”

ESB: Where would a win over García rank among all the pro fights that you’ve fought over your career?

Lamont Peterson: “I think it would be my biggest victory. Flat out, you’re talking about a guy who is considered to be the best at the weight class and I beat him. So, I figure, that’ll be the best victory of my career. It happened with Amir Khan (30-3, 19 KOs) and they were considering him to be the best, but you still had [Timothy] Bradley (30-1-1, 1 NC, 12 KOs) there who, in my heart, I thought was the best in the weight class at the time. I did it once, then García beat [Khan] so beating him will definitely be the biggest win of my career. ”

ESB: Are your fights ever personal, where you don’t want to talk to anyone until after your fight is over?

Lamont Peterson: “It’s a business. It’s a sport. I’d like it to be fun for me. I’m not going to get into no grudge match or beef with anyone. Honestly, I take beef seriously. And it won’t be no boxing or internet type of talk. I take those things very seriously, so I won’t get into it. This is my sport, this is my livelihood, [and] this is how I make my money. So I keep that totally separate.”

ESB: Who was the hardest puncher that you’ve ever faced?

Lamont Peterson: “I could easily say Lucas [Matthysse], but I won’t say that. As far as what I felt and what I remember, I know Victor Ortiz (30-5-2, 23 KOs) probably had the heaviest hands that I fought. ”

ESB: What did you want to be growing up? Was it a boxer all along?

Lamont Peterson: “From as far as I can remember, I wanted to be a boxer. I never wanted or tried to be anything else but a boxer.”

ESB: You have a compelling story associated with how you’ve emerged on the boxing scene from humble beginnings. There’s almost a movie-like quality to it. If they ever decided to make a movie about your life, who would you want to play Lamont Peterson in the film?

Lamont Peterson: “I’m not sure. I would probably pick me because who could tell and show the world me, better than me? I’m not a good actor, but I can be me.”

ESB: If you could meet anyone in life, who would it be and why?

Lamont Peterson: “I’m not sure. That’s something I’d have to think about. Off the top of my head, I really can’t think of anyone. But, if we go back and I was alive, I would love to have met someone like Harriet Tubman. Just to talk to hear and be around her, someone as strong as she was, I know some of that would rub off on me. ”

ESB: For our final rapid-fire segment, I’ll give you a name and you tell me the first thing that comes to mind.

ESB: Thanks for your time Lamont and best of luck on the 11th.