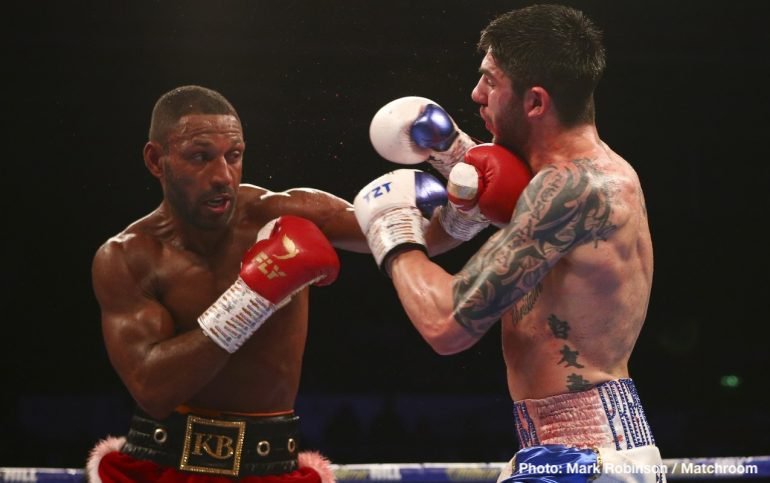 The scores were 118-110, 119-109 and 117-111. Zerafa fought well enough to get couple of rounds. He was getting too much for him to earn more than two. Boxing 247 had Brook winning 10 rounds to 2. It was a good tune-up level fight for Brook to get him ready for one of the top welterweights, be it Khan or someone like WBC champion Shawn Porter. As already mentioned, Brook, 32, is now the mandatory for WBA 154 lb champion Hurd. Unless there’s a lot of money for Brook to make against Hurd, he should wait for either the Khan fight or a world title match against one of the welterweights.

Brook was getting hit too much for his own good tonight by Zerafa. It wasn’t that Brook didn’t get his own shots in. He was landing all night. The normally good power that Brook has wasn’t there tonight. He might have taken off too much weight during training camp, and it sapped his strength. Brook admitted that he wasn’t at his best tonight, and that he couldn’t get his shots off.

If everything goes right, Brook should be getting a big fight for his next match. Brook wants Amir Khan, but if he can’t get that fight, then he’s hoping to fight one of the welterweight champions. WBA junior middleweight champion Jarrett Hurd is an option as well for Brook, but he obviously isn’t the first choice or even the second. If there’s absolutely no big fights for Brook at 147, then it’s possible that he could face Hurd. That would be a risky fight for Brook. He’ suffered eye injuries in his losses to Gennady Golovkin and Errol Spence Jr. in the past. Brook’s face has held together in his last two fights against Zerafa and Sergey Rabchenko, but those are not super punchers or talents like Spence and GGG. Hurd has the kind of power that could cause damage to Brook’s face if he lands enough shots.

Tonight’s fight was hardly as easy one for Brook, as he getting hit a lot by the younger 26-year-old Zerafa, and he had problems with his youth and natural size. Zerafa has spent much of his career at middleweight, and he’s a tough out for welterweights like Brook. Try as might, Brook could not hurt Zerafa tonight. He hit the Australian with his best shots, but couldn’t get him out of there. In the later rounds, Zerafa started to get to Brook with his left-right combinations, and he appeared to buzz him a few times. It’s lucky for Brook that he wasn’t facing a stronger puncher than Zerafa tonight. It might have ended early for Brook.

Brook had been saying in the last two weeks that this fight against Zerafa might be his last in his hometown of Sheffield. Brook wants to fight Amir Khan or one of the top welterweight champions, and those fights would likely take place outside of Sheffield. Brook’s career is winding down, and he’s not going to last too much longer before he retires.

Brook complained after the fight about Amir Khan not stepping up to fight him yet. Brook wants Khan to agree to the fight straightaway so the two of them can face each other in a huge career-high payday clash for both of them in March in a stadium. Khan had been saying he wants to fight Brook, but he suddenly has put him on the back-burner in favor of a potential $5 million payday to face World Boxing Organization welterweight champion Terence Crawford in March on ESPN PPV.

“It has to happen next. He’s got one more fight with Eddie [Hearn],” Brook said to skysports.com after his win over Zerafa tonight. “It was supposed to me and him getting it on in the big one, but he is just running off again. Listen, I am ready. I will get back in the gym, I am hungry again, I am reborn and I am ready to take the world on.”

Khan and Brook need to come to an agreement over the rehydration weight clause for the fight. That’s the only thing that’s missing right now. Khan wants Brook to agree to a 10-lb rehydration clause that will keep him from putting on more than 10 pounds after the weigh-in. Brook would need to keep his weight within 10 lbs for the secondary weigh-in.

“I don’t know if I was trying to much, expected too much and was just a bit flat,” Brook said to skysports.com. “I was a bit like Klitschko tonight, the right I just couldn’t let it go. But I have got the buzz back, I am reborn and I love boxing again.”

Brook wasn’t just a bit flat tonight. He looked shot. Maybe the beatings that Brook took in losses to Errol Spence Jr. and Gennady Golovkin took something out of him, because he looked like a shadow of his former self tonight. We didn’t see the deterioration in Brook’s last fight against Sergey Rabchenko last March, considering he was facing such a weak opponent. Tonight, Brook had a younger, bigger and more resilient guy inside the ring with him in 26-year-old Zerafa, and he exposed his age and the deterioration.

Although Brook got the win tonight over Zerafa, it has to be viewed as a disappointment for him, his promoter Eddie Hearn, and his boxing fans. This was supposed to be an easy fight for Brook, but it wasn’t. The fact that Zerafa was able to go the distance and get the better of Brook in the final two rounds in the 11th and 12th doesn’t bode well for him beating any of the welterweight champions or Hurd at 154. Brook might beat Khan, but it remains to be seen whether that fight can be put together.