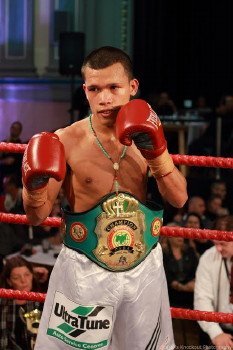 Petalcorin’s Australian based manager Peter Maniatis states “l first saw Randy “Ultratune” Petalcorin Fight on the Brian Viloria vs Carlos Tamara world title undercard in January 2010 in Manila when Randy was only 18 years old and I signed a deal with him basically after that fight to co-manage him in General Santos City with Jim Managquil. My plan was to always bring Randy Ultratune to Melbourne so he can train and fight under Mick Hargreaves BoxingFit gym as his trainer.”

According to Maniatis “l really think Randy “Ultratune” Petalcorin can win 3 World title in 3 different weight classes by the time he finishes with his boxing career he has everything to be a superstar of the sport.”

Maniatis believes “Top Rank is by far the most successful boxing promotional company in the world, the events in Macau at the Venetian and also live free to air TV Fist of Power events with SECA Group in mainland China have put Asian boxing on the World map. Anyone who has dealt with Top Rank will tell you its first class they treat you like family – from living legend promoter Bob Arum to Hall of Fame matchmaker Bruce Trampler and the international boxing guru and engine room Sean Gibbons and Brad Goodman, who are all great boxing people. Australian boxing has already benefited as we worked to get Steve Attard and Andrew Robinson on the Manny Pacquiao vs Chris Algieri world title undercard in Macau late last year.