Oleksandr Usyk wants to defeat Tyson Fury for his people in Ukraine when the two heavyweight champions meet for the undisputed championship in February or March.

The 2012 Olympic gold medalist Usyk looks determined, and he could shock the world by beating the goliath-like Fury in a big upset. Fury has slowed down considerably in recent years, and he fights lazily, involving essentially mauling & leaning.

Normally, that’s the style that fat journeymen heavyweights use, not elite-level guys. The fact that Fury is fighting like that at this age suggests that he’s getting old, and having a trainer that advocates that style doesn’t help.

Usyk (20-0, 13 KOs) looked determined when he came face-to-face with Fury (33-0-1, 24 KOs) last Saturday night after his win over Derek Chisora at Tottenham Hotspurs Stadium in London.

The fans had been waiting for Fury to be forced into agreeing to the fight with Usyk, and he gave them what they wanted.

Interestingly, Fury seemed to switch things up when the two were face-to-face and began talking to fellow countryman Joe Joyce at ringside, saying how he wants to fight him. 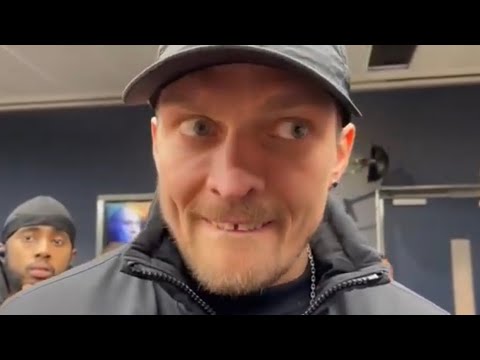 “I will train really, really hard to get a victory in this fight,” said Oleksandr Usyk to Boxing UK about his bout with Tyson Fury in 2023. “It’s for the whole world. First, I want to do it for my country and my people. Second, I want to do it for all people to be happy about that fact.”

One got the impression from how Fury turned his attention to the 6’6″ Joyce that he’s not made up his mind about who he wishes to fight.

It’s understandable why Fury would wish to face the slower, more hittable Joe Joyce (15-0, 14 KOs) than Usyk because this is the kind of opponent he’s been accustomed to facing during his fourteen-year professional career.

“Engine is much more important than [size?]. If he could, he probably would,” said Usyk when asked if Fury went easy on Derek Chisora. “It’s good sparring.

“Yes, I think he improved his skills and physical ability since we fought in the WSB,” said Usyk about Joe Joyce.

Fury has never faced anyone like Usyk before. With the way he’s slowed down in the last three years, it’s questionable whether he possesses the speed, agility, and movement to win against this type of opponent at this stage of his career.

It would have been easier for Fury to deal with a guy like Usyk earlier in his career when he was younger and mobile, but not at this late stage.

Fury’s mobility has disappeared with his advancing age, and he could have many problems against the three-belt unified heavyweight champion.

“I said we’ll see each other in the ring,” said Usyk when asked what he told Tyson Fury during their face-off. “Maybe [fighting Fury in February or March]. No,” Usyk said when asked if he was bothered by Fury calling him names to his face.