Gervonta ‘Tank’ Davis has leaked a $10 million offer for a fight against Ryan Garcia from Matchroom Boxing boss Eddie Hearn in what some believe is an annoyance at a comment the British promoter made to the media last Saturday night.

It’s unclear whether Tank Davis (27-0, 25 KOs) is getting more than $10M from PBC for the Ryan fight or if he simply leaked the offer from Hearn out of principle, not carrying that it was a better offer.

The email that Tank reportedly leaked from Hearn has not only a guaranteed $10 million but also a PPV bonus to be agreed upon. It sounds like good money for the fight against the boxer / social media star Ryan Garcia. 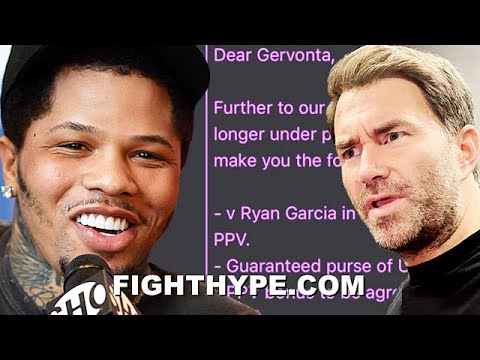 “It’s really quite annoying. Done one about me, and I went back to read it, and it was gone. Someone had screenshotted it, quite luckily. It’s quite strange. But he’s said a dozen times that he’s no longer under promotions with Mayweather Promotions.

“Maybe,” said Hearn when asked if he’s reached out to Tank Davis.

Some fans don’t like the idea of fighters leaking emails from promoters because it seems petty.

Many boxing fans rate the Hector Luis Garcia fight as a far riskier one or Tank Davis than the one against Ryan, as we’re talking about a proven world champion with an Olympic pedigree.

Ryan Garcia hasn’t fought anyone at the pro level and didn’t have a comparable amateur career.

If Ryan had fought Devin Haney when he had the opportunity earlier in his career, people would know now if he’s the real deal, but he hasn’t. The best name on Ryan’s resume is Luke Campbell, who has never viewed an elite before retiring from the sport.