Tyson Fury is just itching for a fight against Joe Joyce rather than Oleksandr Usyk for his next contest in early 2023.

It’s understandable why Fury (33-0-1, 24 KOs) wants interim WBO heavyweight champion Joyce (15-0, 14 KOs) because he’s smothering all the oxygen in the UK with the positive press that he’s getting.

Many boxing fans believe the 2016 Olympic silver medalist will beat Tyson handily. All the fans that have been saying that Fury is the #1 heavyweight in the UK after Anthony Joshua’s downfall are now looking at Joyce as the top dog.

With Fury wanting the biggest payday possible, it’s obvious that he’ll get more money fighting Joyce than he will Usyk. We saw how little Usyk had to say when Fury invited him up to the ring apron last Saturday night after his win over journeyman Derek Chisora.

Usyk stood there looking at Fury blankly, saying nothing while he trashed him. If not for Joyce saving the day by jumping into the ring to let Fury know that he was ready to fight him, it would have ended badly.

Fury wants Joyce if no Usyk

“I said, ‘Let’s get it on. The Rabbit [Oleksandr Usyk] is next,'” said Tyson Fury to iFL TV when asked what he told Oleksandr Usyk when he came up to the ring apron after the fight. 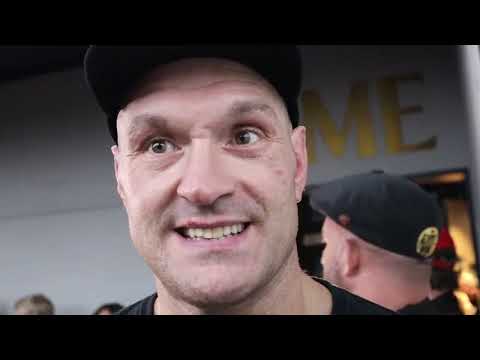 “If the rabbit can’t be made in Saudi or wherever, then we’ll do Joe Joyce in Wembley next year.

“When I was coming up, [Wladimir] Klitschko would never ever mention my name. Now that I’m champion, I’m mentioning these guys’ names, and I’m the only one that wants to call Joe Joyce out. Again, Joe Joyce is getting called out.

“If we can’t do Usyk next, we’ll do Joe Joyce at Wembley. I’m not sure,” said Fury when asked why a fight with Usyk might not get made.

“Why didn’t Spence and Crawford fight? It’s not as easy as saying, ‘Let’s do it.’ He [Usyk] seems willing, and I’m willing, so hopefully, it’ll be done next year.

“Derek is a tough old boy. I forgot how tough he was. He took some bludgeoning punches tonight, and I hope he gets home in one piece and is 100% well. I detonated on him with some heavy, heavy shots.

“It’s sad to see, really. He maybe should have been pulled out a little earlier, but he is a warrior, and he deserved to stay in there as long as he could. A big shout-out to Derek. He’s a warrior and too tough for his own good.

“Derek came in and tried, and I gave him a lot of punishment, and he hit me with some good shots as well. It was a great fight, and I got some rounds out of it, which puts me well for the New Year,” said Fury.

It’s Fury’s fault for picking out the inept 38-year-old Chisora as his opponent instead of a good heavyweight. If Fury wants to blame anyone for this mismatch, he needs to look in the mirror because he’s the one that shoved this poor excuse for a fight down the throats of the paying Brits.

If Fury had any sense, he’d have chosen a quality heavyweight that could have given him a run for his money and perhaps beaten him, but he wanted Chisora, which tells you a lot about his mindset.